The Queen Dies: How Princess Elizabeth Succeeded Father King George VI on a Trip to Kenya 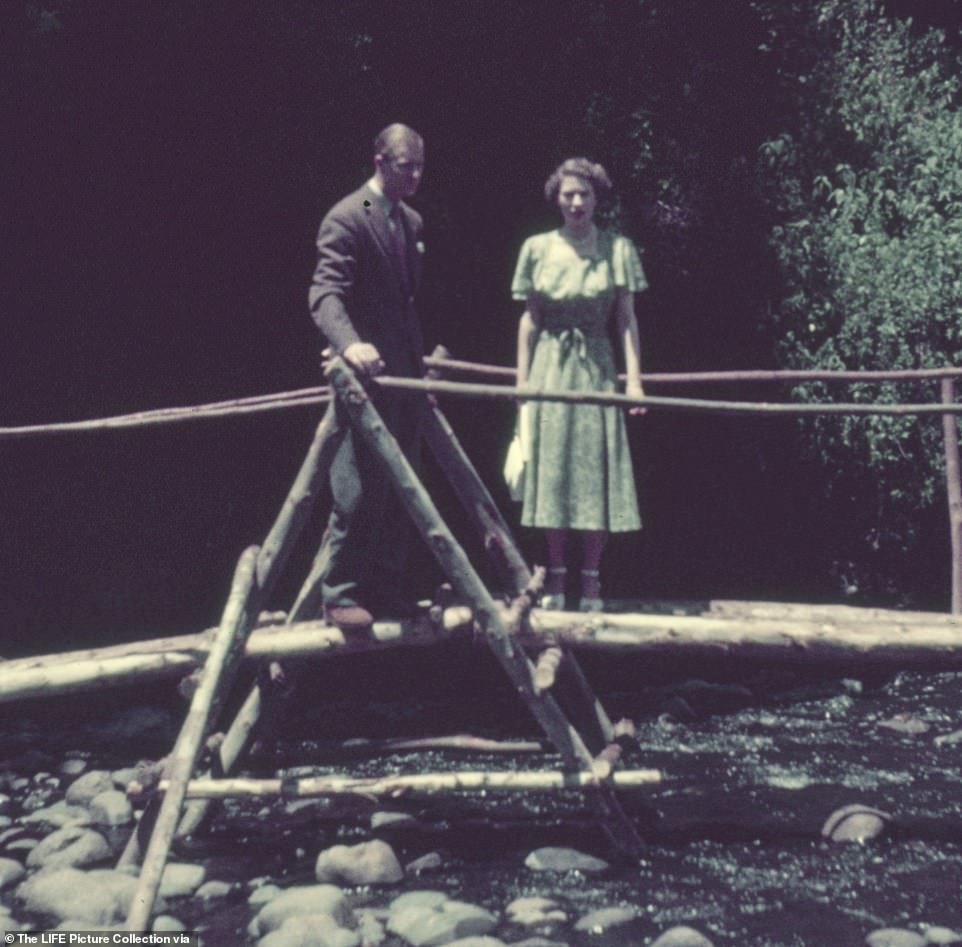 It was Prince Philip who told his wife the news of the king’s death while they were alone.

They had stayed at Sagana Lodge given to them as a wedding present by the people of Kenya, resting after a night at the Treetops Hotel, in Aberdare Forest, watching big game.

At the age of 25, the new queen was the same age as Elizabeth I when she came to the throne.

Her Majesty and the Duke of Edinburgh had been married less than five years when their lives changed irrevocably.

When he heard the news, Philip looked as if “half the world had fallen on him,” said a close associate. But Elizabeth was calm even in a time of such sorrow.

Lord Charteris, her private secretary at the time, recalled seeing the new Queen sitting at her desk in the Lodge shortly after hearing the news.

Her cheeks were a little red, but there were no tears. She was ready to take on the role for which she had been carefully prepared.

Princess Elizabeth and Philip in Kenya in the gardens of the Sagana Lodge, which she received as a wedding present, the day before he told her that her father, George VI, was dead 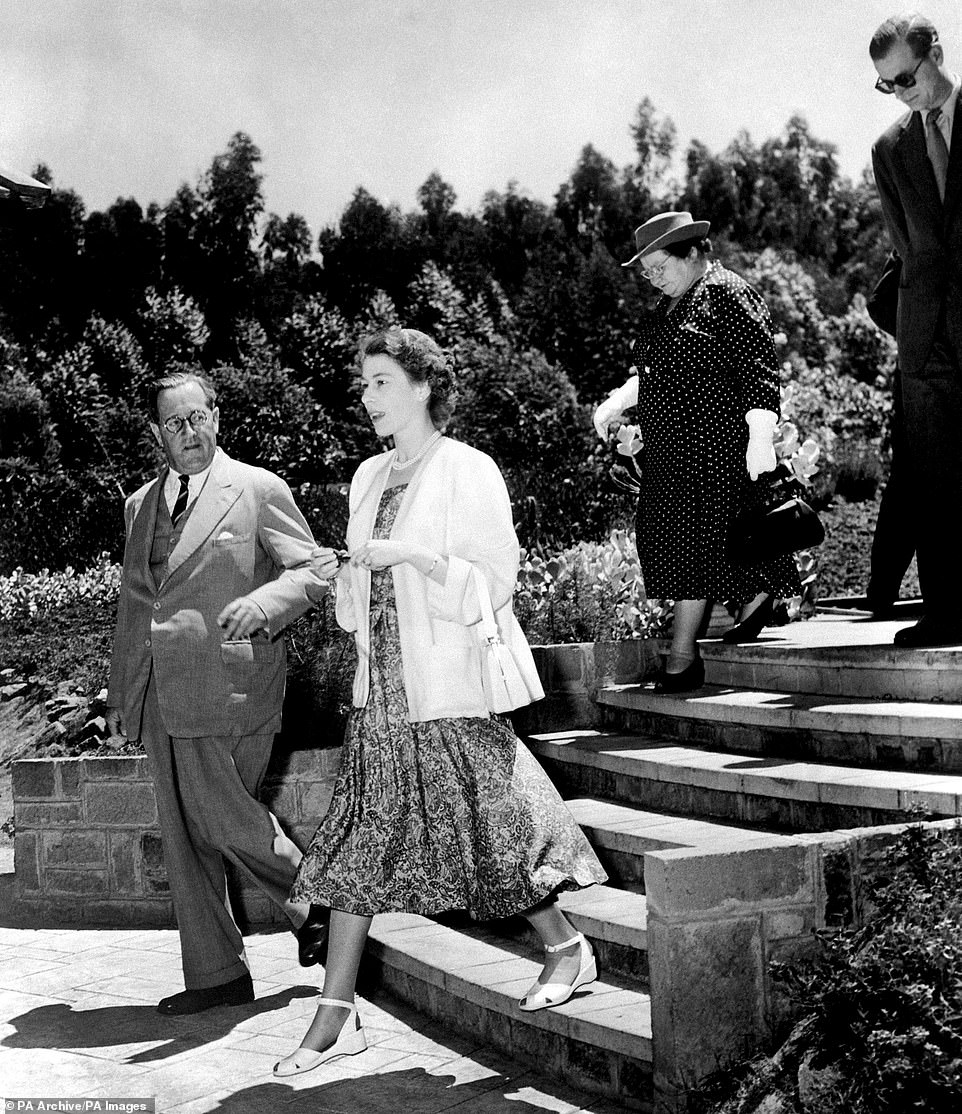 The Queen walks through the Sagana Lodge in Kenya next to Sir Philip Mitchell, Governor of Kenya, a few hours after receiving news that her father had died on February 6, 1952

When he asked what name she wanted to use as queen, she simply replied, “My own name, of course, Elizabeth.”

The tour was canceled and the royal couple returned home on February 7.

Queen Mary was the first to pay formal tribute, kissing her granddaughter’s hand that afternoon.

The next day, February 8, Princess Elizabeth was officially proclaimed Queen.

The Queen smiles as she leaves for Kenya on January 31, 1952, pictured left, but looks somber as she returns home after her father’s death, right 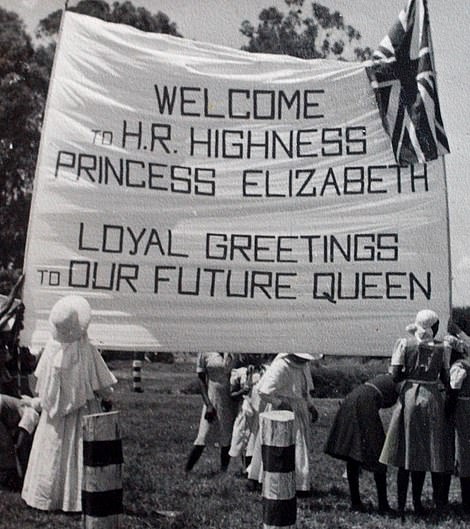 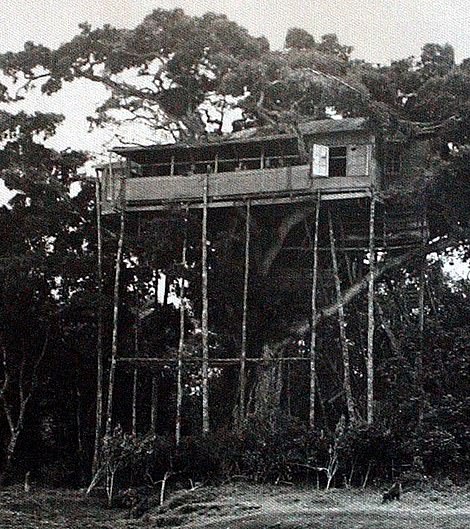 This banner was unveiled by nuns in Kenya the day before Elizabeth learned of her father’s death. The royal couple had spent the night at the Treetops Hotel, yet, when a message was given to Philip that the king was dead. 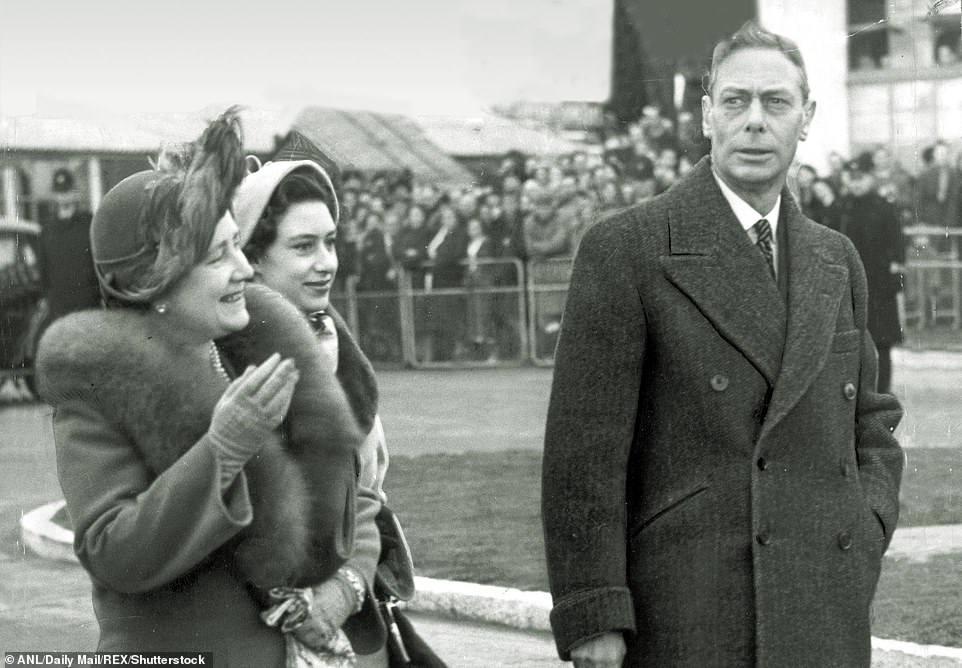 Elizabeth’s father King George VI, her mother Queen Elizabeth and sister Princess Margaret at London Airport to wave her goodbyes ahead of the tour. He died six days later.

She was crowned at Westminster Abbey on June 2, 1953 – by chance the same day a joyful people learned that a Commonwealth team had conquered Mount Everest.

The ceremony was broadcast all over the world via the burgeoning new medium of television.

Tens of thousands braved the pouring rain on the streets of Buckingham Palace and 20 million people across the country watched the event on television.

It captured the hearts and minds of a war-starved nation with pomp and circumstance.

The Queen was crowned with the St Edward’s Crown and her coronation gown, by couturier Norman Hartnell, was a white satin gown set with diamonds, gold and silver, seed pearls and crystals. 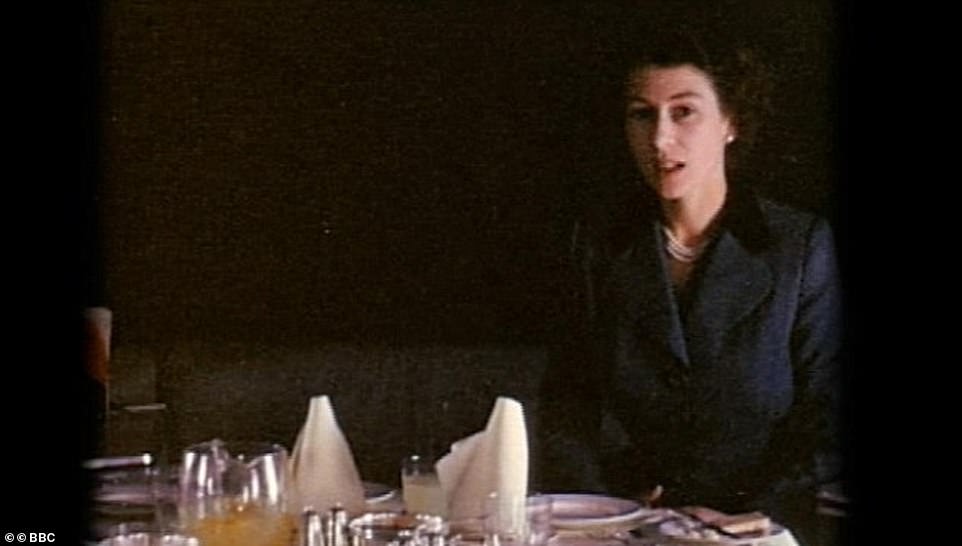 The Queen learns of her father’s death – and the beginning of her reign – as she returns from Kenya in 1952, in private footage believed to have been filmed on the plane by the Duke of Edinburgh. It was first shown in a BBC documentary in 2012 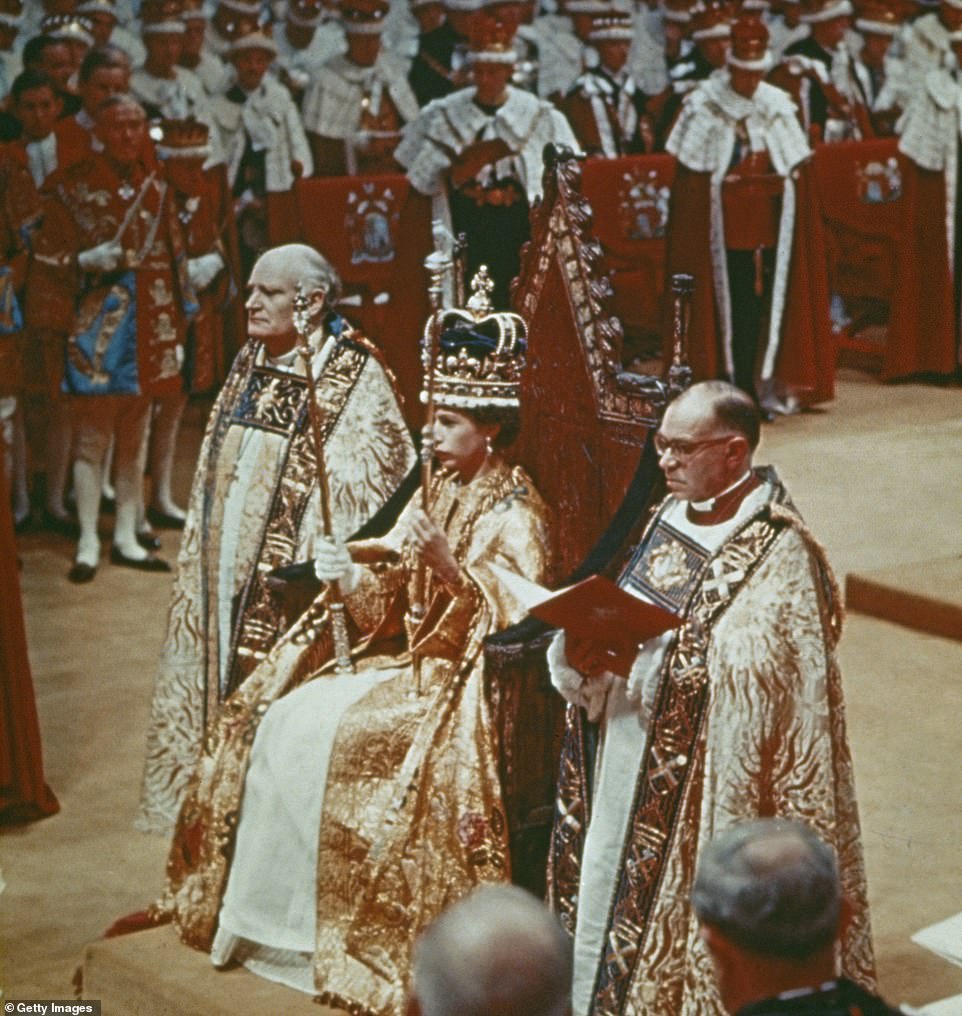 Princess Elizabeth was officially proclaimed Queen on February 8, 1952. She was crowned in Westminster Abbey (pictured) on June 2, 1953 – by chance on the same day, a joyful people heard that a Commonwealth team had conquered Mount Everest 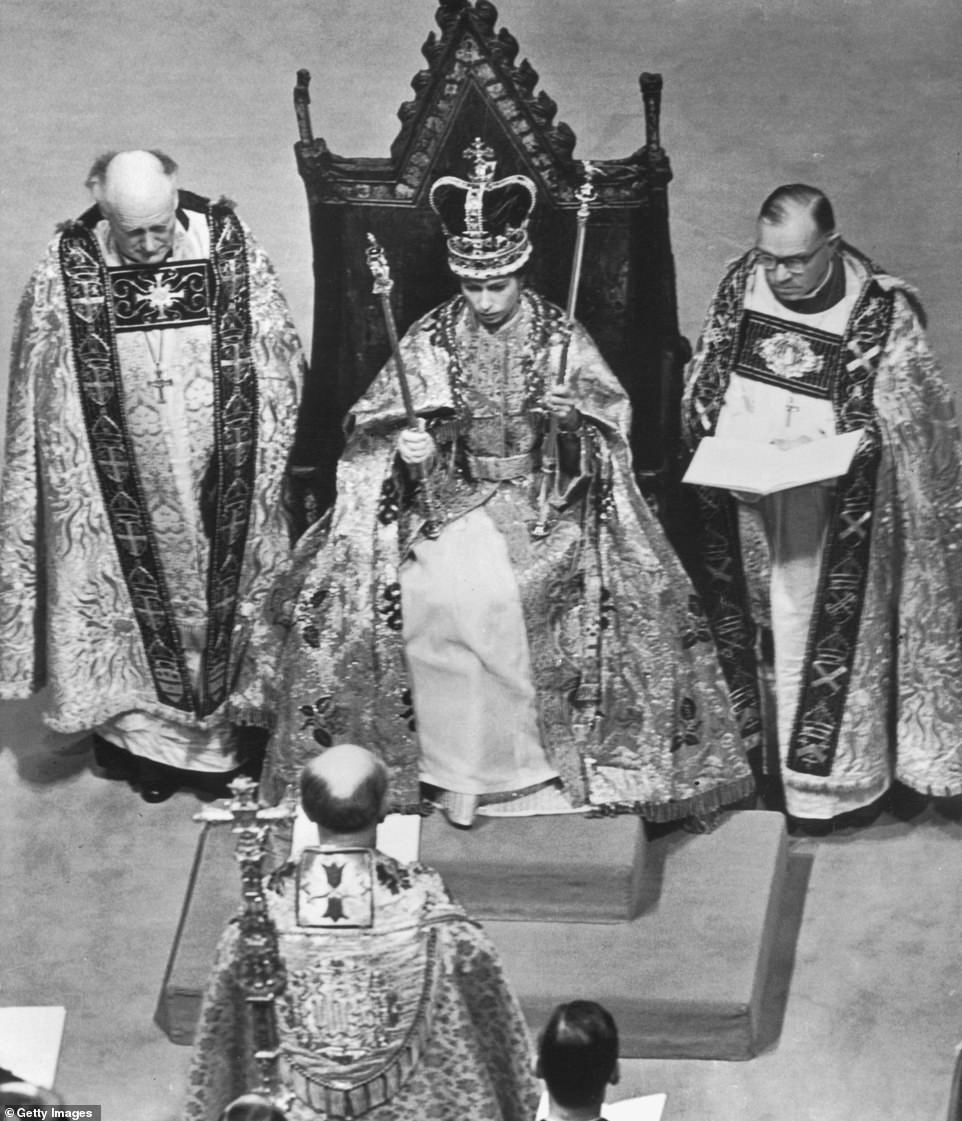 The Queen was crowned with the St Edward’s Crown and her coronation gown, by couturier Norman Hartnell, was a white satin gown set with diamonds, gold and silver, seed pearls and crystals.

Queen Elizabeth II had already made her first Christmas broadcast in 1952, telling the people of the Commonwealth and the Empire, in a speech she wrote herself, that she would serve them “all the days of my life.”

The Queen’s public life developed as she took part in Britain’s moments of joy and sorrow.

When severe flooding hit the east coast in January 1953, she and Philip drove from Sandringham to talk to victims and rescuers.

Following her coronation, the Queen toured Scotland, Wales and Northern Ireland nationwide, viewing the fleet and the RAF.

She toured the Commonwealth, covering 50,000 miles, after opening her second parliament in November 1953.

In 1955, the scandal surrounding Princess Margaret’s love life came to a head. 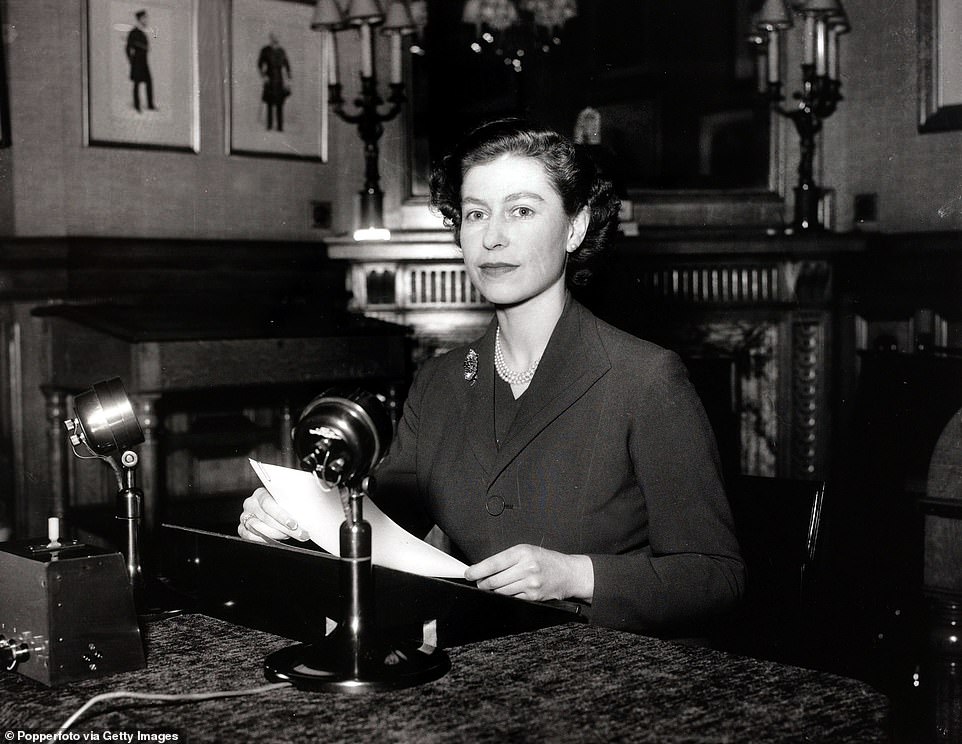 The Queen makes her first Christmas broadcast in 1952, telling the people of the Commonwealth and Empire that she would serve them ‘all the days of my life’ 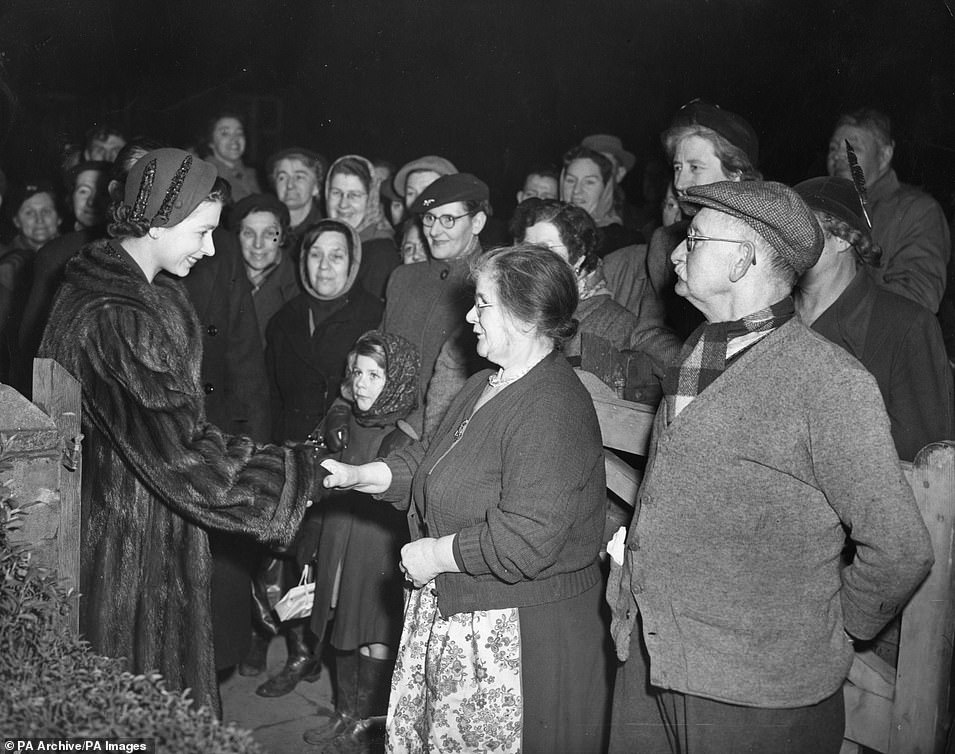 The Queen in Belvedere, Kent, meets victims of major North Sea flooding that hit the east coast in January 1953

The Queen’s sister bowed to royal pressure and abandoned plans to marry the ‘unfit’ divorced group captain Peter Townsend so that her place in the royal family’s life would not be denied.

She eventually married Antony Armstrong-Jones, later Lord Snowdon, in 1960. They separated in 1976 and later divorced.

Commonwealth Prime Ministers came to London for her government’s first conference in 1955, but by April her own Prime Minister, Sir Winston Churchill, had resigned.

The day before he did, the Queen dined for the first time at 10 Downing Street.

She enjoyed a close relationship with the great statesman, breaking precedent in 1965 by becoming the first sovereign to attend the state funeral of one of her subjects. 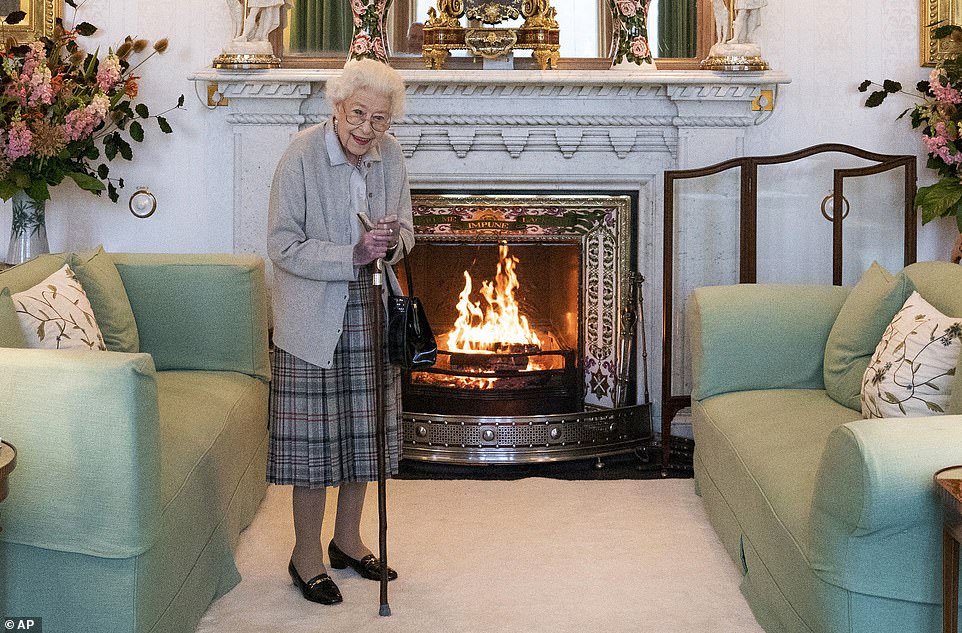 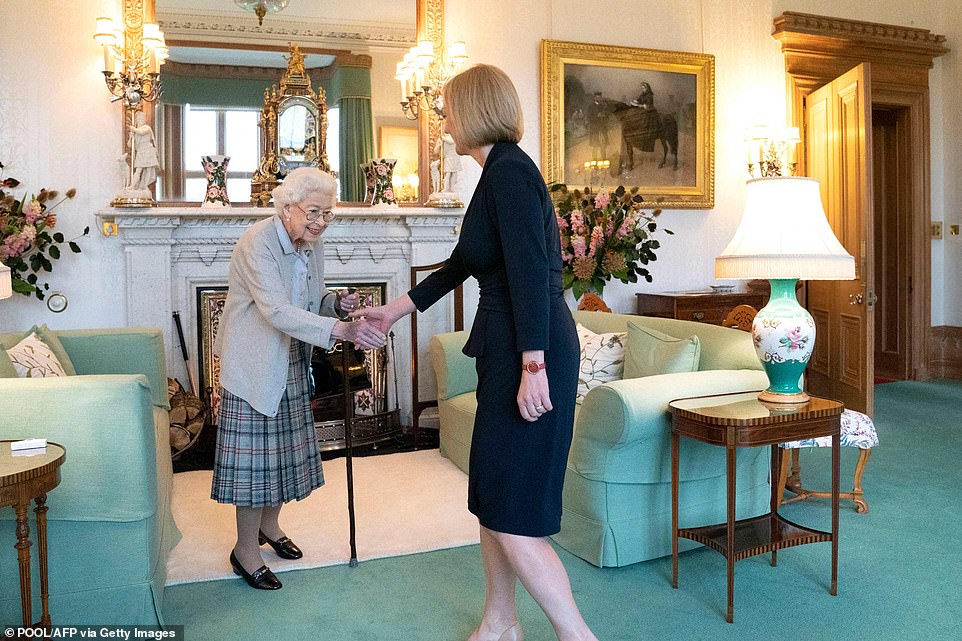 Prince Charles is now following in his mother’s footsteps at the age of 73, meaning he was the longest-serving heir in British history.

And while Mrs. Truss was his mother’s last prime minister, Conservative leader Charles will be the first.

Just as his mother was asked, Charles is given a choice about the name he uses as king.

While he could simply be known as King Charles III, the former Prince of Wales could also use Philip, Arthur or George as these were the middle names he was given at birth.

Like his mother, Charles will then follow centuries of royal tradition by being crowned at Westminster Abbey.