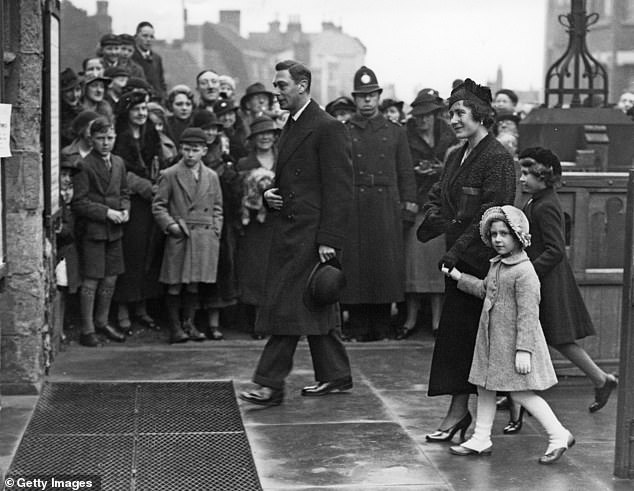 Religious leaders around the world have paid tribute to the Queen, who was the head of the Church of England, after she died Thursday at the age of 96.

All her life, Queen Elizabeth II upheld her Christian faith after she first attended church as a child with her parents, the Queen Mother and King George VI — and she once said her religion was “an inspiration and anchor” during her reign.

The Archbishop of Canterbury led tributes from religious leaders to the monarch, whom he described as a “faithful Christian disciple.”

The Duke and Duchess of York (later King George VI and the Queen Mother) attend a church service in Eastbourne, Sussex, in March 1936 with Princess Elizabeth (back right) and Princess Margaret (front right) 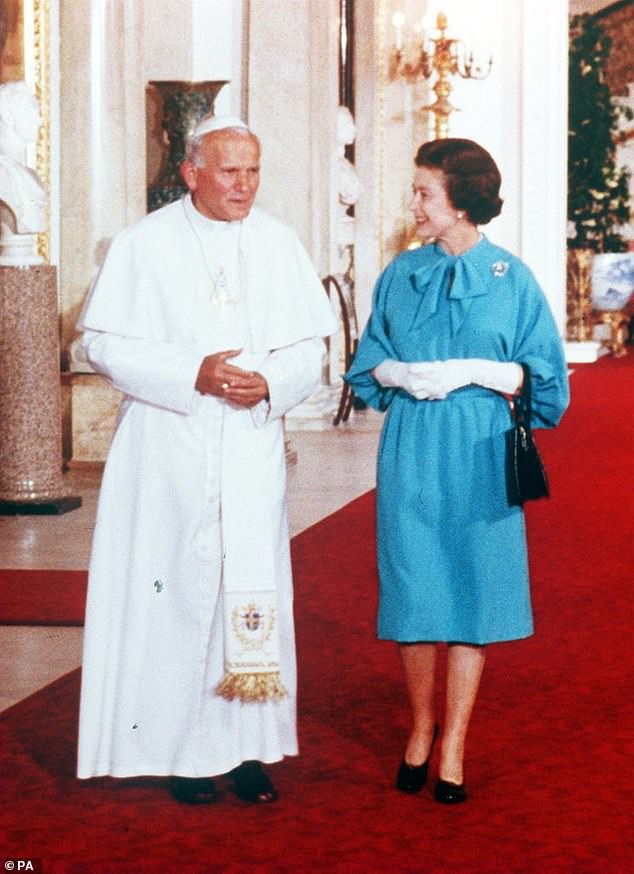 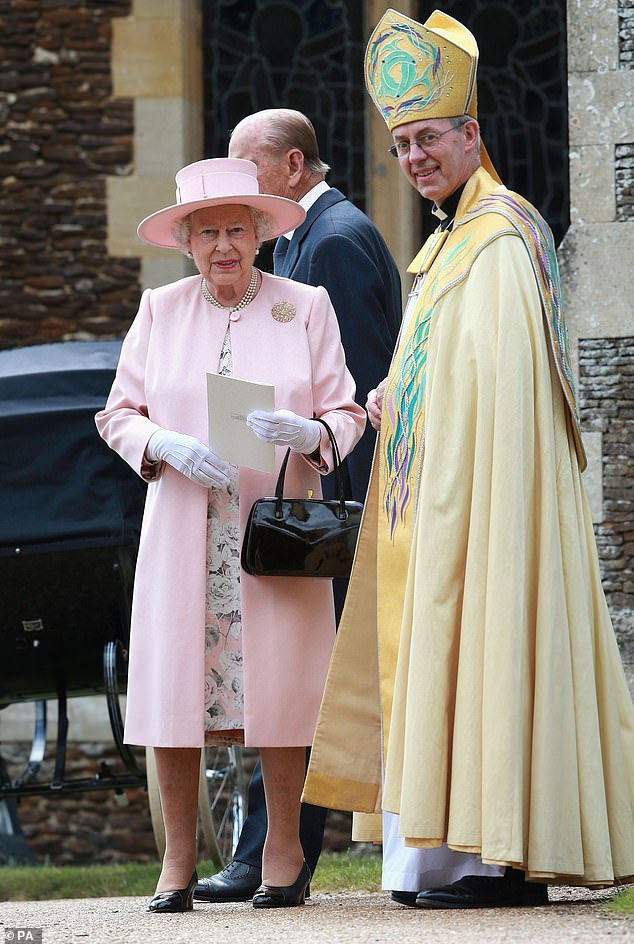 Following news of her death, the Archbishop of Canterbury has issued a statement paying tribute to the Queen as a ‘faithful Christian disciple’

The monarch’s devotion to her religion has undoubtedly helped her through some of the most difficult times in her life – especially after the loss of her husband Prince Philip last April.

During her 2021 Christmas address to the nation, Her Majesty paid tribute to her late husband for his dedication to her and dedication to public service throughout his life.

Later in the talk, she shared how the story of Christ helped her and many others around the world to appreciate new beginnings.

The Queen said: ‘[Children] teach us all a lesson, just like the Christmas story, that at the birth of a child there is a new dawn with endless possibilities.

“Simple events that form the basis of the life of Jesus, a man whose teachings have been passed down from generation to generation, and which have been the foundation of my faith.” 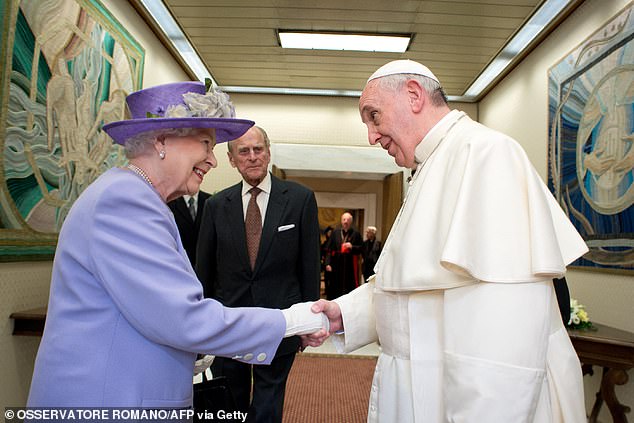 After the death of Queen Elizabeth II, Pope Francis (right) said he prayed for Her Majesty’s ‘eternal rest’ (pictured with the Queen in 2014 in the Vatican)

For 70 years of her reign, the Queen’s Christmas Day speeches evoked biblical references to the story of the birth of Christ, as well as other stories, including the Good Samaritan.

When she ascended to the throne after her father’s death in 1952, the then 25-year-old queen vowed to be guided by her Christian faith during her reign and asked her subjects to pray for her before her coronation the following summer.

In her first Christmas address to the nation that same year, which was broadcast on radio, the Monarch said, “Pray for me … that God may give me wisdom and strength to carry out the solemn promises which I shall make, and that I may serve Him and you faithfully all the days of my life.’

In 1989, she referred to the story and used it to ask people to think about how they could help their friends and neighbors who “need a helping hand.”

She said, “It would be wonderful to think that in the closing years of the twentieth century, Christ’s message of loving our neighbors as ourselves would finally be heeded.”

As the world prepared to usher in the new millennium in the year 2000, the monarch used her Christmas speech to once again honor the birth of Christ.

She said, “Today we celebrate the fact that Jesus Christ was born 2,000 years ago; this is the true millennium birthday.’

The monarch added: “For me, the teachings of Christ and my own personal responsibility before God provide a framework in which I try to live my life.

“Like so many of you, during difficult times, I have found great comfort in the words and example of Christ.” 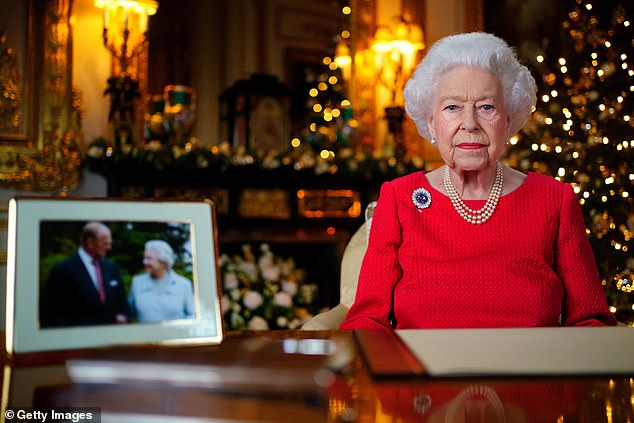 The Queen paid a moving tribute to her ‘beloved’ Prince Philip in the 2021 Christmas message, telling how Christ’s story brought her comfort in times of grief

The Queen has attended church every Sunday since she was a baby with her parents and sister, Princess Margaret.

Elizabeth II’s faith is said to have been influenced and inspired by her grandfather, King George V, who was known to read a chapter of the Bible every night.

As religious leaders around the world paid tribute to the Queen, they recognized the late Monarch’s devotion to her faith and how it affected her reign.

The Archbishop of Canterbury said in a statement: “Her faith in God and deep love for God were fundamental in the way she lived her life – hour after hour, day after day.

“In the life of The Late Queen, we have seen what it means to receive the gift of life given to us by God and—through patient, humble, selfless service—share it as a gift to others.

“Her late Majesty found great joy and satisfaction in the service of her people and her God, ‘whose service is perfect liberty’ (BCP).

“For giving her whole life to us and making her life of service an instrument of God’s peace among us, we owe her immeasurable gratitude.”

The chief rabbi also paid his respects, calling the monarch a “rock of stability and a champion of timeless worth.”

He said: ‘We extend our deepest condolences to Her Majesty’s son and heir and all members of the Royal Family.

“We pray that our nation will benefit from the strength and understanding of our new Sovereign for many years to come.”

The Chief Rabbi added: “She has never let us down.”

Pope Francis also offered his condolences to King Charles III, adding that he prayed for the late queen’s “eternal rest”.

He said to the new king, “I assure Your Majesty of my prayers that Almighty God will sustain you with His unfailing grace as you now assume your high responsibilities as King.”

When she became Queen, Her Majesty was automatically given the role of Defender of the Faith and Supreme Governor of the Church of England – a responsibility she took incredibly seriously.

Its duties include appointing Archbishops, Bishops and Deans of the Church of England at the behest of the Prime Minister.