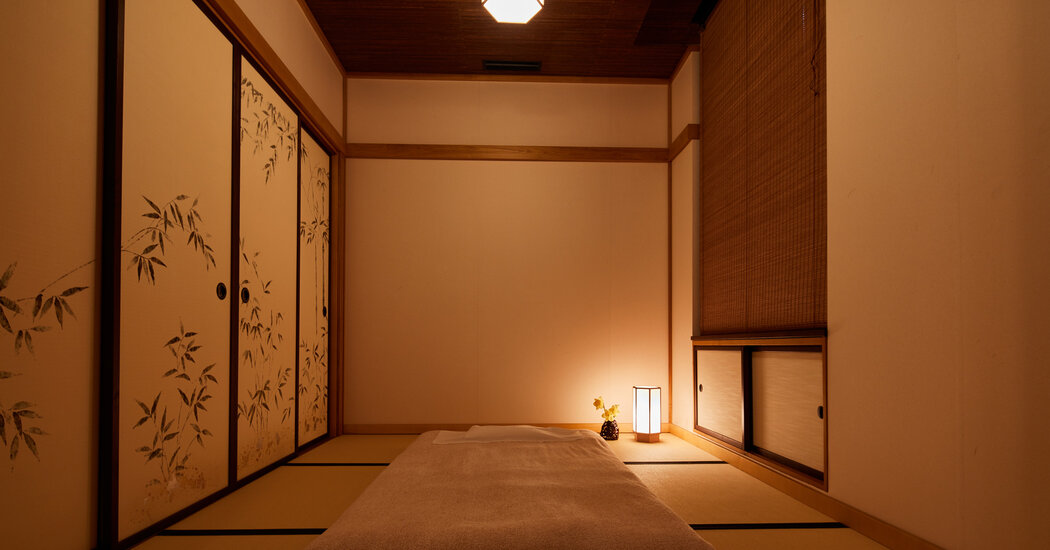 Welcome to the T List, a newsletter from the editors of T Magazine. Every week we share things that we now eat, wear, listen to or covet. Register here to find us in your inbox every Wednesday. And you can always reach us at tlist@nytimes.com.

Lyon-born Sandra Jollet had long been fascinated by the holistic philosophies associated with shiatsu massage, which she was exposed to at a young age by her father, an acupuncturist and shiatsu therapist. But it wasn’t until she visited Japan that she decided she would open one day ryokanstyle spa of its own in France, a vision that has now come to fruition with Maison Suisen, located in the heart of the popular Marais district of Paris. From the moment guests enter, Maison Suisen embodies the concept of: omotenashi, or the art of hospitality, where each visitor is asked to choose from an assortment of organic teas from Japan which they then brew and serve after treatment. Among other services, guests can choose between traditional shiatsu, on tatami and futon, or a more contemporary setup with massage table and aromatic oil. From $130, suisen.fr.

An art student at the University of Brighton and then the Royal Drawing School in London, the now 28-year-old artist Somaya Critchlow noticed a lack of depictions of black women in Western art. “I felt isolated, so I thought I’d confront myself,” she says of her decision to draw her own body. “As soon as I started drawing myself naked, I started enjoying myself.” These self-portraits soon evolved into a broader celebration of black femininity, one shown in her first monograph, “Somaya Critchlow: Paintings.” Referring to disparate influences—Renaissance and Rococo portraiture, the surrealism of Leonor Fini and David Lynch, and the unabashed carnality of pop stars like Cardi B and Nicki Minaj—Critchlow depicts curvaceous women, often in varying states of undress, in an ambiguous zone between sexualized objects and playful independent subject. $40, artbook.com.

Pieces with a sense of place

Handcrafted objects by international artisans are the raison d’être of En Place, a new digital home decor store that is the brainchild of Alexis Kanter, a creative consultant and former market editor at Vanity Fair. From a playful raffia and clay table lamp by Spanish ceramist Marta Bonilla to a graphic black and white chair upholstered in hand-woven natural wool by Guatemala-based store Meso Goods, the curated selection is presented against a chic editorial background featuring stories from creators and city ​​guides, adding context and story to each piece. “I wanted to create a marketplace where you can shop online, but also in an experiential way that wasn’t traditional brick and mortar,” Kanter says. Later this year, En Place will also partner with a handful of hotels (including Hôtel le Sud in Antibes, France, and Santa Clara 1728 in Lisbon), allowing guests to purchase their wares at the click of a button. “I like to think of it as a reimagining of the hotel’s gift shop,” she says, “making it seamless to bring home something meaningful that really tells the story of a place.” from $24, en-place.co.

While shopping at a beauty salon in Seoul a few years ago, couple Su min Park and Wonny Lee realized that although the shelves were stocked with Korean products, the fragrance department only offered well-known Western brands. So Park, a photographer and art director, and Lee, a marketing executive, who live in New York City, decided to create Elorea, a modern fragrance brand inspired by Korea’s rich history and culture. “We were at a time in our lives where we wanted to get closer to our roots and culture,” Lee says. A portmanteau of “elements” and “Korea”, Elorea launches with four distinctive scents, named after the four trigrams that adorn the South Korean flag: heaven, earth, water and fire. After extensive research, the pair sourced ingredients from different regions of South Korea, such as citrus from Jeju, which they blended with camellia and nutmeg for the warm notes of amber and leather in Fire. from $170, elorea.com.

Like many of us, Brooklyn-based artist Elliott Puckette has spent the pandemic seeking solace in what she can control, while making peace with what she cannot. Her ninth solo exhibition at New York’s Kasmin Gallery, which will also publish her first major monograph later this year, showcases her signature precise yet elaborate line paintings alongside her first foray into sculpture, a medium she has long wanted to explore. Early attempts with plaster from Paris, wire, paper and clay were unsuccessful. “It was an absolute disaster,” says Puckette. “Then I realized it wasn’t something I could do alone; I had to hand it over.” The two sculptures in the exhibit, “Random Walk” and “Pivot,” cast in bronze by Workshop Art Fabrication in Kingston, NY, represent a natural evolution of Puckette’s career-long dedication to the line by manifesting it in three-dimensional space. What once wriggled within the confines of the canvas has now broken loose. “Elliott Puckette” is on display at Kasmin Gallery from January 13 to February 26, kasmingallery.com.

A new kind of performance piece

My daughter’s married boyfriend can’t come with us on vacation, right?

Mom, 24, who ate fast food daily during pregnancy, loses 38 kg – and is now an OnlyFans model