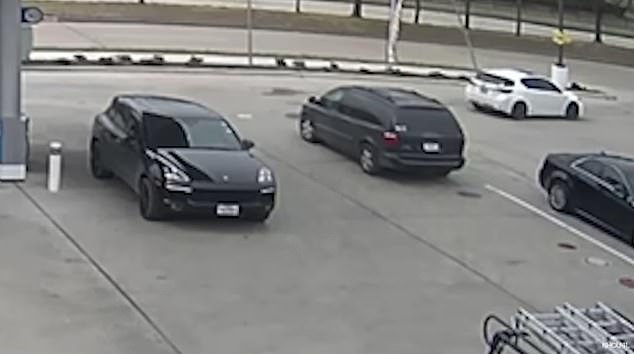 A family-owned gas station in Houston, Texas lost out on nearly $5,000 after a group of thieves stole more than 1,000 gallons of fuel last week – a series of brazen daylight thefts that come as Americans are becoming increasingly desperate for cheap fuel.

Gas prices have been rising steadily since Russian forces invaded Ukraine on February 24, with prices averaging $4.325 for a gallon of regular on Monday.

That is up more than a quarter from one week ago, according to AAA, and nearly a dollar – or a whopping 24 percent – from one month ago.

Monday’s average was also more than double the rate it was at last year, when the national average was just $2.859. Diesel is also averaging $5.131.

He admitted that it would cause the already-high gas prices to rise, but claimed it would ‘deal another blow to Putin’s war machine.’

Now Americans are becoming desperate for cheap gasoline, with TMZ reporting that some thieves have begun drilling holes into gas tanks, shimmying under the chasses of their cars to drill the holes and catch the fuel before it hits the ground.

One group of thieves were caught doing so at a family-owned gas station in Houston, Texas, where they used a ‘trap door in their vehicle’ to suck out the gasoline in underground tankards.

‘The way they did it was very sneaky,’ Jerry Thayil, who caught them in action on surveillance footage, told KHOU.

‘They were doing it in front of so many people – so many different customers.’

A group of thieves were caught on surveillance footage in a green van (right) outside of a Houston, Texas-based gas station. They accomplished the brazen daylight theft by parking over an underground tankard and siphoning off gas before it hit the pump, while a black car (left) kept watch 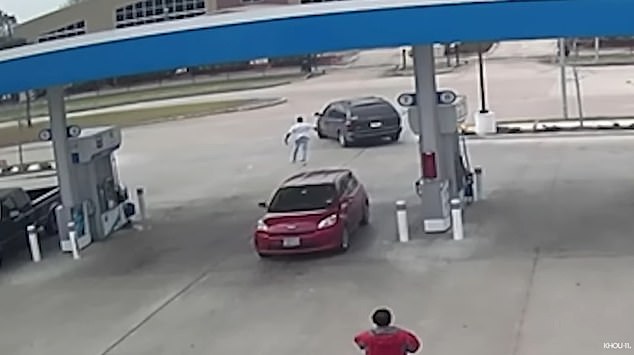 Eventually, owner Jerry Thayil (pictured at center in a white shirt) caught on to the act – and when he saw the same car on Friday he began chasing after them

Thayil’s family owns the Fuqua Express gas station in Houston, where gas prices are averaging $3.978 and diesel prices cost an average of $4.834, according to AAA.

He said a group of thieves hit his Chevron station three times last week and tried for a fourth.

Thayil ultimately caught onto the act after noticing a deficiency in his stores of about ‘350 gallons of diesel per day’ for three days in a row.

At that point, he said, he began combing through the surveillance footage, and noticed a green van ‘just parked out there.’

‘Each time they were there about 15 to 20 minutes…in a high traffic time.’

He later realized that a black SUV was playing lookout to aid in the crime.

In total, Thayil said, the thieves stole over 1,000 gallons of gas, explaining: ‘We had locks on our fill caps. Still, they were coming in and … I think they were locking it with their own locks.’

Thayil was in his office on Friday, just hours after calling the Houston Police Department about the alleged thefts when he noticed the same green van pull up, and took off after it.

‘I need to have them see me going after them, and to scare them away.’

‘In this kind of job, every penny counts,’ he said. ‘We can’t afford to lose a single more gallon.’ 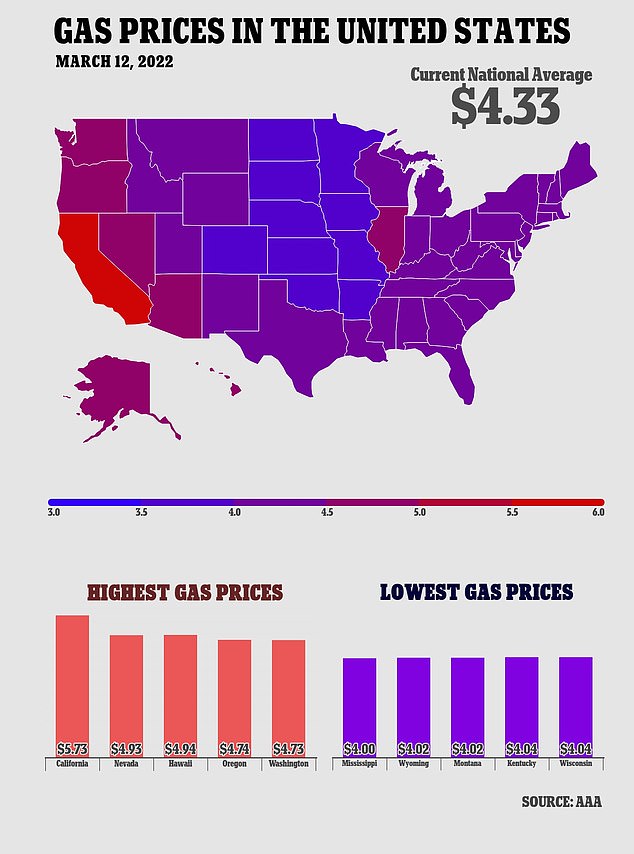 The average gas price in the United States was $4.33 on Monday 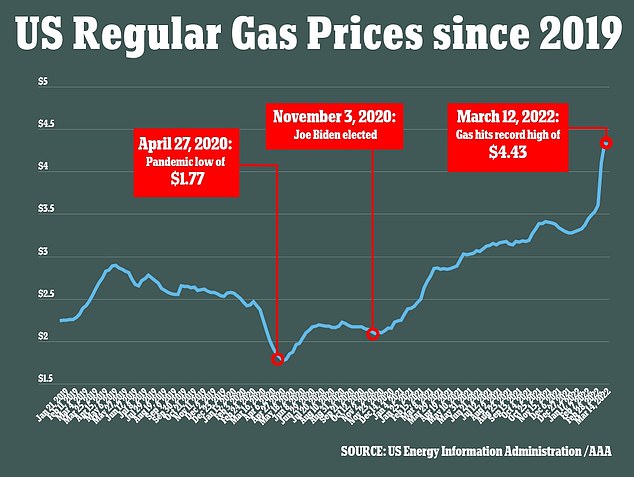 Gas prices were already high as inflation reached a 40-year high of 7.9 percent in February, but increased even further after Russia invaded Ukraine on February 24, reaching a record high of $4.43 on Saturday

Gas prices reached a record high $4.43 per gallon on average Saturday, with prices $1.54 higher than it was at the same time last year, The Hill reports.

That was the highest gas prices have been since July 2008, when gas cost $4.11 per gallon.

Diesel prices have also seen an increase, with the price up $1.18 in recent weeks, averaging $5.20.

But in certain parts of the country, regular gas prices have skyrocketed into the high $6 range, including in Los Angeles, where some gas prices have reached almost $7 a gallon.

They were already on the high end as the United States reported the consumer price index hit another 40-year high of 7.9 percent in February.

In total, AAA reports, gas prices have risen $0.70 nationally since Russia invaded Ukraine in late February, writing: ‘These are numbers not seen at the pump since the financial crisis in 2008.’

The White House is also trying to pin the rise in prices on the invasion.

‘This is a Putin spike at the gas pump, not one prompted by our sanctions,’ White House Press Secretary Jen Psaki claimed last week, referring to an onslaught of new sanctions against Russian oligarchs for human rights violations the country has committed over the past few weeks.

Russia is one of the world’s largest oil producers, but contributes to less than 10 percent of the oil imports in the United States.

Last year, the U.S. imported about 245 million barrels of oil from Russia – about 8 percent of all U.S. oil imports, up from 198 million barrels in 2020, according to the US Energy Information Administration.

That’s less than the country gets from Mexico or Canada, but more than it imported in 2021 from Saudi Arabia. 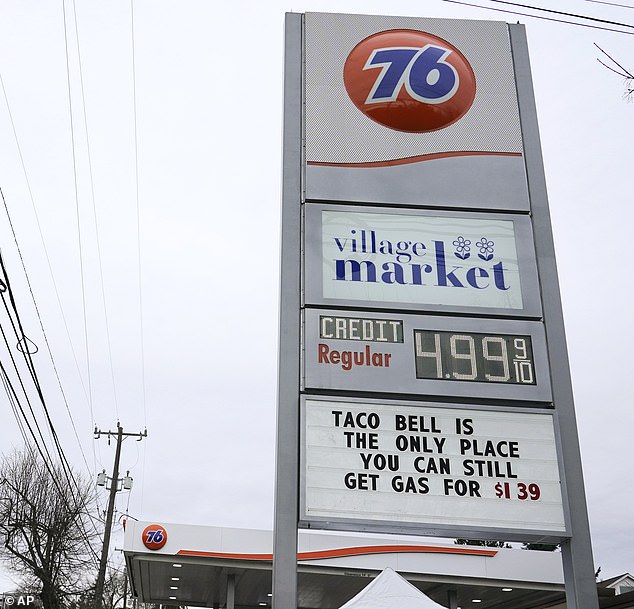 Gas prices reached a record high $4.43 per gallon on average Saturday, with prices $1.54 higher than it was at the same time last year 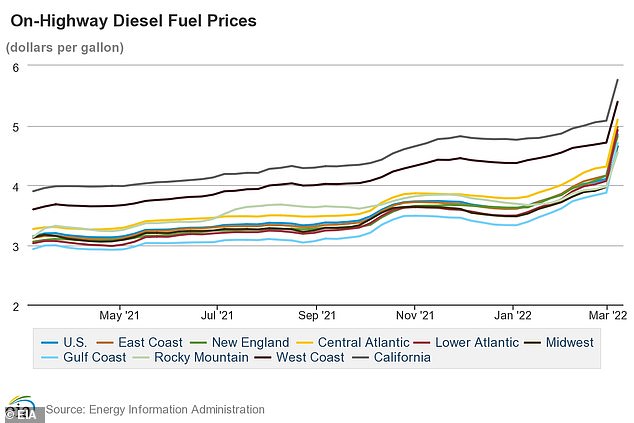 Diesel is also up to $5.13 a gallon, with the West Coast seeing the highest increases 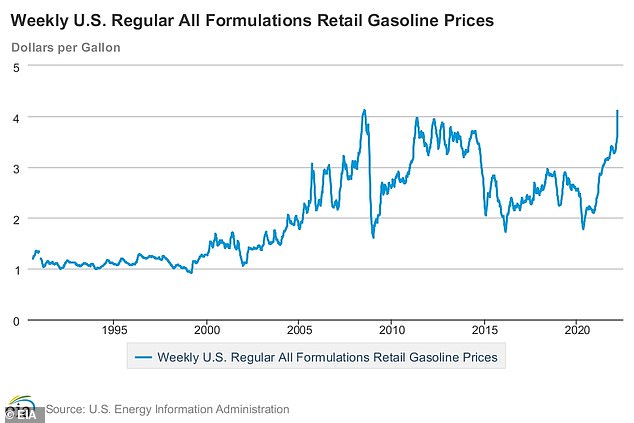 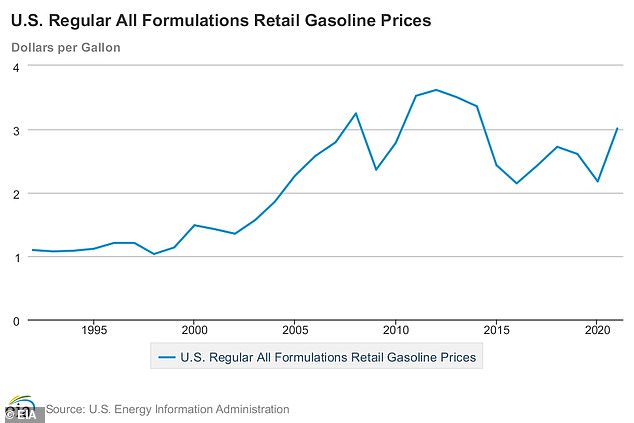 Gas prices have risen $0.70 nationally since Russia invaded Ukraine in late February, reaching heights not seen since the 2008 financial crisis

Now, Americans are saying they will need to change their lifestyles to adjust to the new costs.

In a survey conducted by AAA a few weeks ago, back when gas prices averaged $3.53 per gallon, two-thirds of Americans said they felt the prices were too high.

Over half also reported that they would make changes to their driving habits or lifestyle if the cost rose to $4 a gallon, and if it were to reach $5, like it has in California, 75 percent said they would need to adjust their lifestyle to offset the spike at the pump.

In Los Angeles, one bicycle shop has already reported a rise in demand for the gasless vehicles as the prices continue to skyrocket.

Craton Cochran, of Bikes Etc., told KSLA sales had already increased by 25 to 34 percent since the pandemic began, as people were placed on lockdown, and he expects the trend to continue as people opt for an alternative to the high gas prices.

But at the same time, he said, he is dealing with ongoing supply chain issues – having trouble accessing parts and equipment he said has never before been hard for him to get.

As a result, bikes are costing 15 to 25 percent more, as the demand continues to rise. 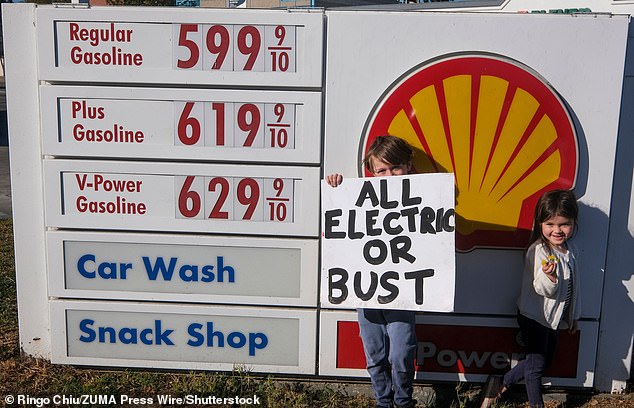 Americans say they will have to change their lifestyles to accommodate the high prices. Children are seen here protesting against the rising gas prices on Saturday in Santa Monica, California 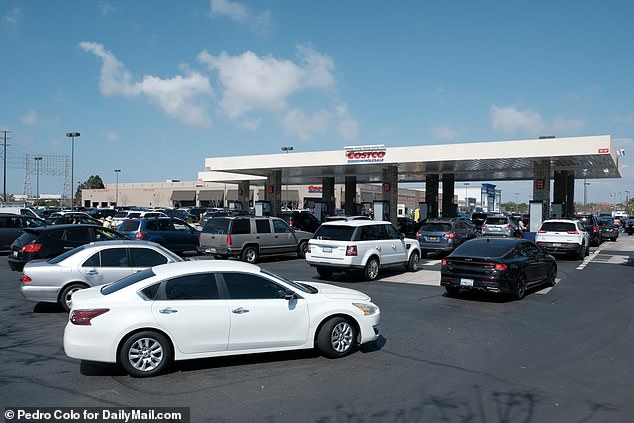 Uber has also begun to charge customers a new fuel fee to help offset costs for ride-hail and delivery drivers.

It will take effect on Wednesday. All the money will go directly to drivers, San Francisco-based Uber said, and isn’t meant to cover the entire cost of gas, but to ‘soften the burden.’

The surcharge will be in effect for at least 60 days, after which Uber said it will assess gas prices and driver sentiment.

The surcharges are based on the average trip distance and the increase in gas prices in each state, Uber said.

‘We know that prices have been going up across the economy, so we’ve done our best to help drivers and couriers without placing too much additional burden on consumers,’ Liza Winship, head of driver operations for the US and Canada, said of the new surcharges in a press release. 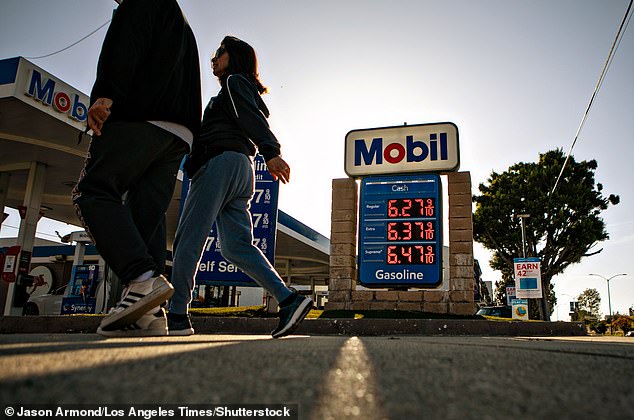 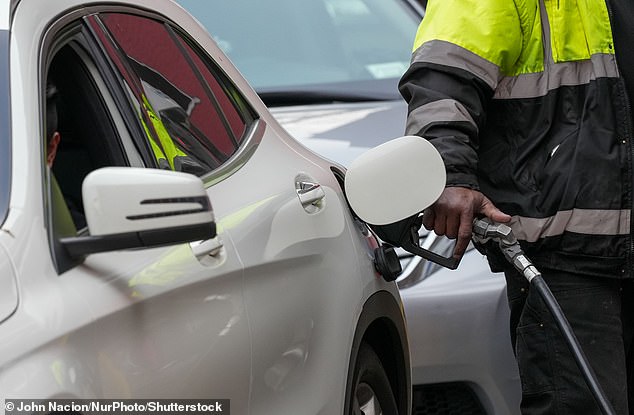 Still, Americans have said they are generally in favor of sanctioning Russian oil

Still, Americans are generally in favor of sanctioning Russian oil, according to a poll released Sunday.

Seventy-seven percent of the 2,088 adults in the CBS News/YouGov survey say they support sanctioning Russia oil, while 23 percent said they opposed such sanctions.

Americans are generally in favor of sanctioning Russian oil, even if it means prices rise at the gas pump, but 52 percent of respondents in a Sunday poll say President Joe Biden’s actions toward Russia since it invaded Ukraine still is ‘not strong enough.’

Seventy-seven percent of the 2,088 adults in the CBS News/YouGov survey say they support sanctioning Russia oil, while 23 percent said they opposed such sanctions.

But when asked if they would still support sanctions if it meant paying more for gas, the support level dropped 14 points to 63 percent and 36 percent said they opposed the move.

And as gas prices soar, the latest poll shows that 63 percent of Americans think the U.S. should up its production of oil and gas within the country while one-third of respondents said Washington should import more oil from the Middle East and South America.

The latest poll was taken March 8-11, as Russia closed in on Kyiv, and has a margin of error of plus or minus 2.6 percentage points.