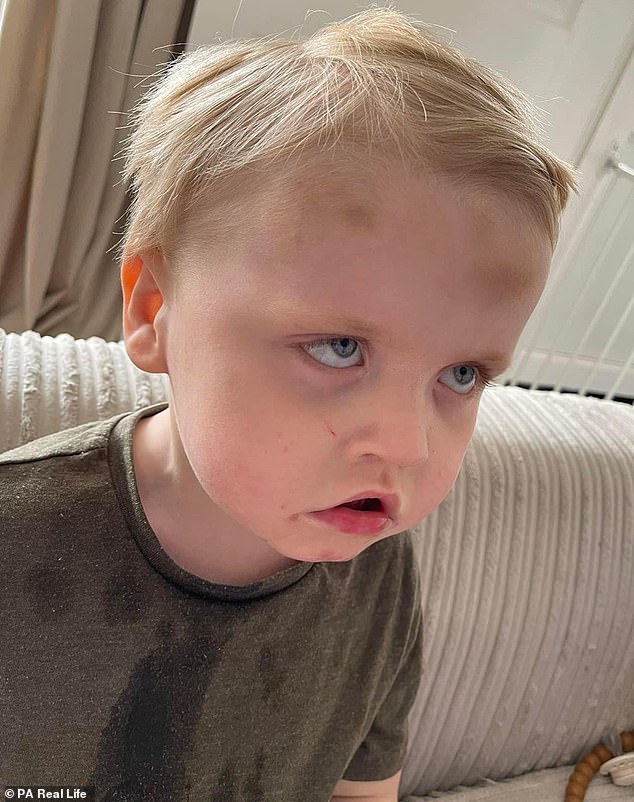 A mother has revealed her despair over her three-year-old son who suffers from a rare condition that prevents him from feeling pain.

Ronnie Bird, three, was diagnosed with Smith-Magenis syndrome (SMS) at the age of one.

The extremely rare condition causes behavioral problems and means he feels no pain, leading to alarming behaviors such as headbutting against the wall.

Mother Kirsty Bird, 26, admits she is afraid that her son will one day “break his neck” with the force of the impact, and that she sometimes fears his strength as a result.

She said, “It’s mental torture watching Ronnie hurt herself every day. He is always so sad.

“He hits walls and doesn’t even flinch. My hair is just torn into pieces because he will pull it out. He doesn’t feel pain, so he doesn’t associate these things with hurting us.’

Ronnie has tantrums. Because he can’t feel pain, he often headbuts the wall or something he is close to 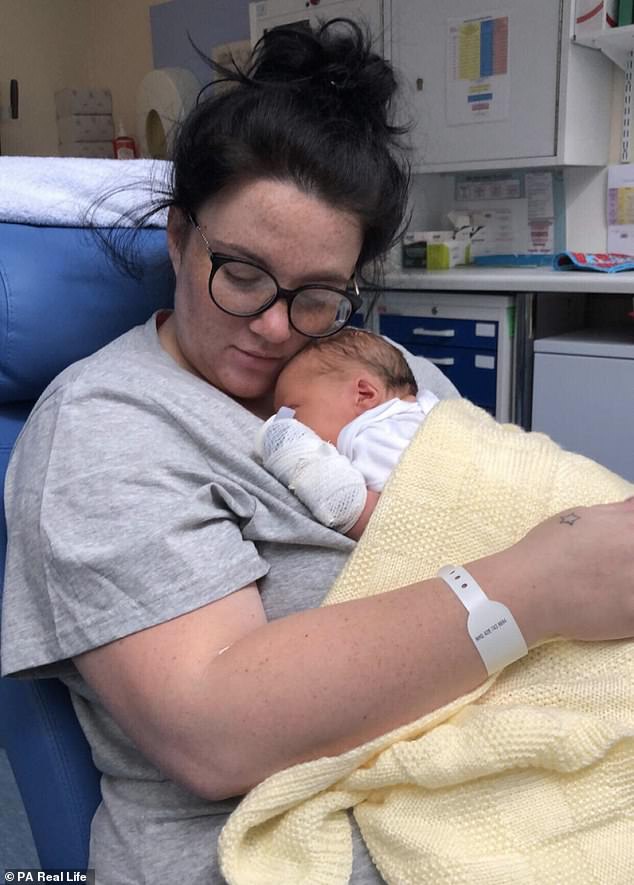 A beautiful baby: Ronnie as a baby pictured here with his loving mother Kirsty Bird, 26, from King’s Lynn, Norfolk 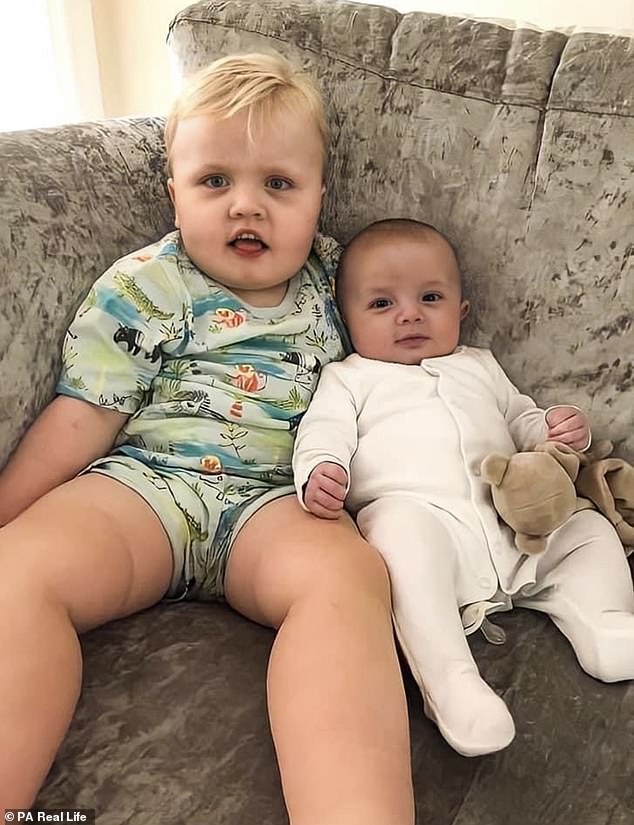 Ronnie, pictured her with his little brother Frankie, was diagnosed with the rare condition shortly after his first birthday

The concerned mother admits she was always afraid something was wrong with her son.

He weighed 9 pounds at birth, despite being born two weeks before his due date, and had to undergo life-saving surgery after six weeks to address a strangulated hernia that threatened to cut off blood flow to his gut.

Kirsty said, “That was terrifying and terrible. I had to hold him while he was put to sleep and I remember watching his eyes close and hoping he would be with me again.” 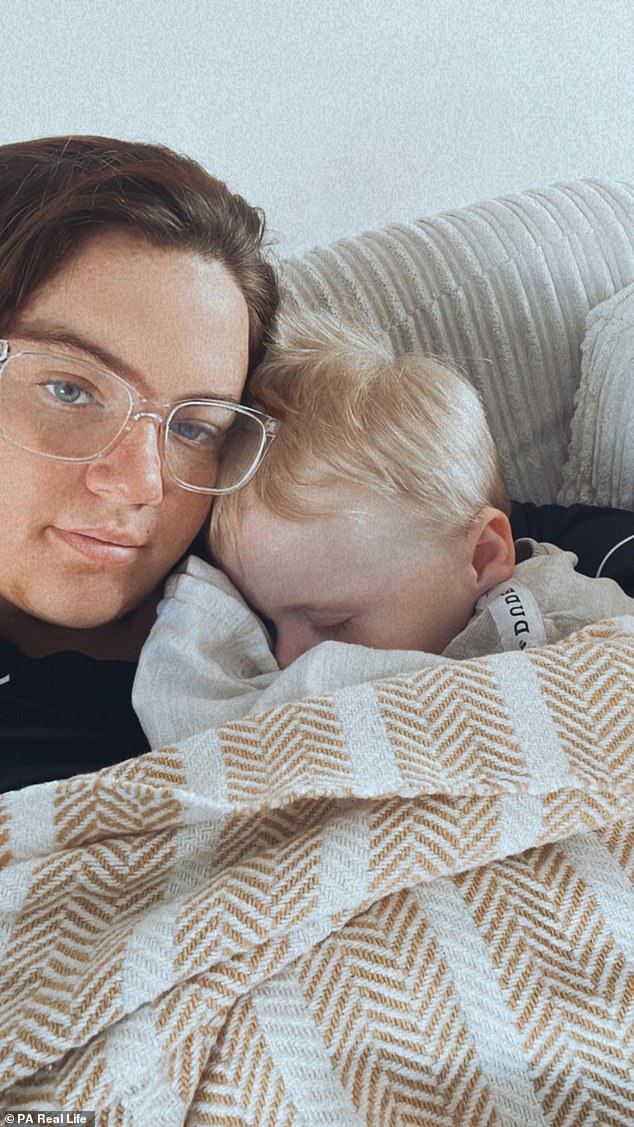 A rare moment of calm when Ronnie has no violent outbursts: Mother Kirsty hugs her sleeping boy 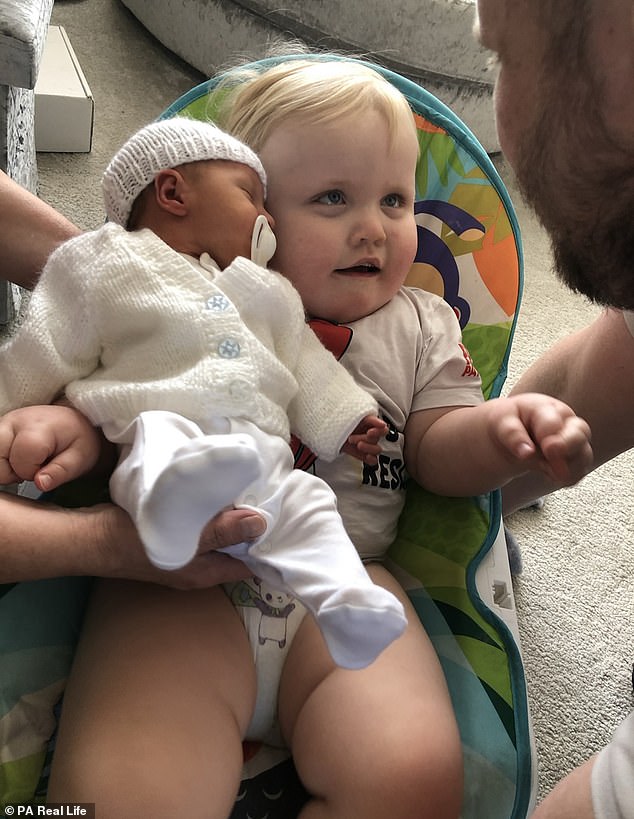 Ronnie, who has Smith-Magenis syndrome (SMS), is Frankie’s big brother, who has no problems

When she was one year old, the baby was diagnosed with Smith-Magenis syndrome (SMS), a rare condition that affects one in 25,000 people.

What is Smith-Magenis syndrome (SMS)?

Smith-Magenis syndrome is a genetic disability due to a mutation on chromosome 17.

People with Smith-Magenis syndrome are characterized by a prominent forehead, a broad square face, deep-set eyes, an underdeveloped midface, a broad bridge of the nose, and a short nose.

Very often during childhood there are feeding problems, weak muscle tone, prolonged napping and lethargy. Disrupted sleep patterns as well as behavioral problems can occur later in childhood and adulthood.

These can include frequent tantrums, impulsivity, anxiety, distractibility, aggression, and self-injurious behavior including hitting and biting oneself.

And it also leaves Ronnie with no sense or awareness of pain and at risk of developing epilepsy and seizures.

Kirsty said, “I felt so worthless, like I let Ronnie down. As a mother, you know there is something wrong with your son, but there is nothing you can do about it, which makes you feel so helpless.

“I had a baby that I had all those dreams for, but suddenly he looked like he was going to lead a bad and troubled life. I saw pictures of adults getting more and more distorted as they got older with texting. It was so scary.’

Kirsty’s mother Mary Denisova, 62, a former cleaning lady in a care home, takes care of her grandson 12 hours a day. Ronnie’s father Daniel, a former insurance worker, has also quit his job to take care of his son.

The couple relies on caregivers benefit, universal credit and living allowance for the disabled.

Kirsty said, “Ronnie’s father gave up his job to stay home and help us. We are a good team. We are constantly skint while trying to make his life happy.

“But we’re fighting an uphill battle. We’ve bought thousands of toys, lights, blankets and are doing everything we can.’

But even with 24-hour care, Ronnie is still difficult.

He mainly suffers from frightening and violent outbursts – and is oblivious to pain – in anger he will often ‘hammer’ his head against walls, furniture and even people.

As a result, while Kirsty loves her “beautiful baby boy,” she admits that his behavior may scare her.

She said, ‘My whole heart aches for him. I’m really scared of him sometimes. If he moves abruptly, I recoil because I’m used to him clawing my face or headbutting or biting me.

“As a mother, you shouldn’t be afraid of your child, but he is so strong.” 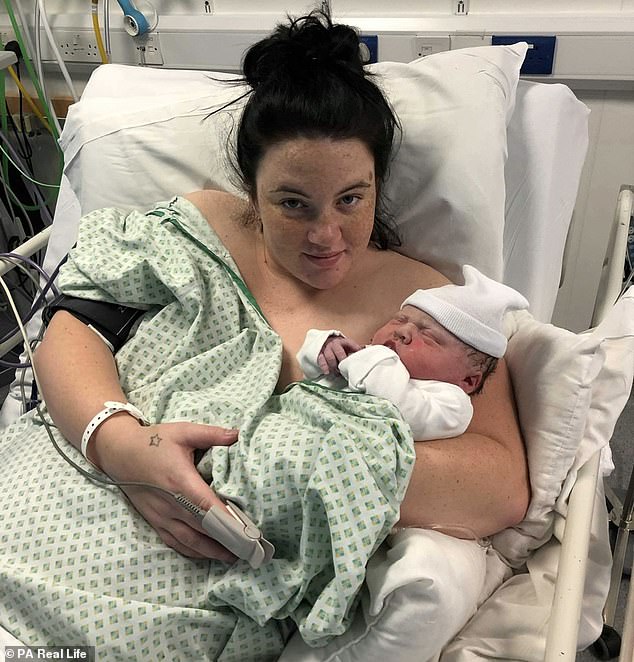 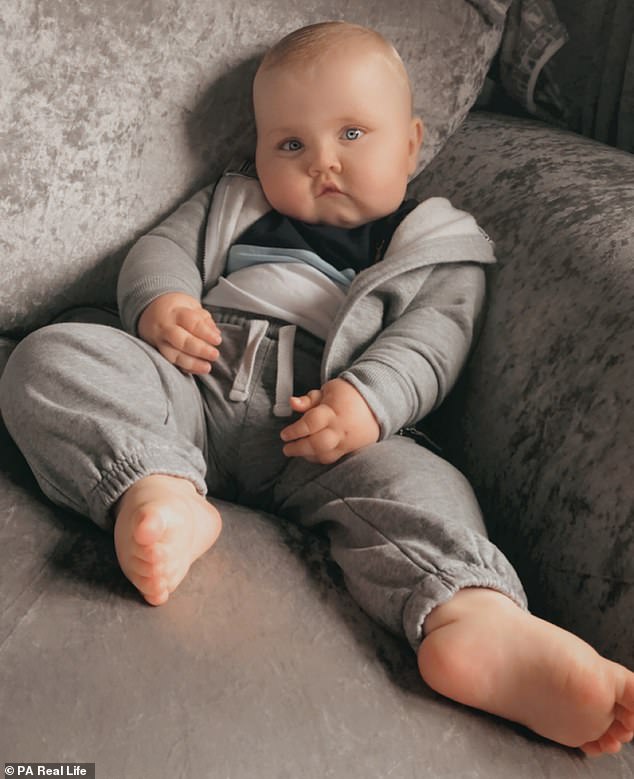 Ronnie’s condition means he has learning disabilities and is oversized, despite barely eating anything

His strength and violent outbursts also mean that Ronnie is in great danger of hurting himself.

Kirsty has stuffed everything she can with pillows and blankets to protect Ronnie from injury.

But it is the night that is worst – for that is when his anger comes most.

She said, “Ronnie headbutts the walls, the couch, everything all day long. We’ve had to fill up everywhere he sits and all the furniture wherever he goes. He does it all night. 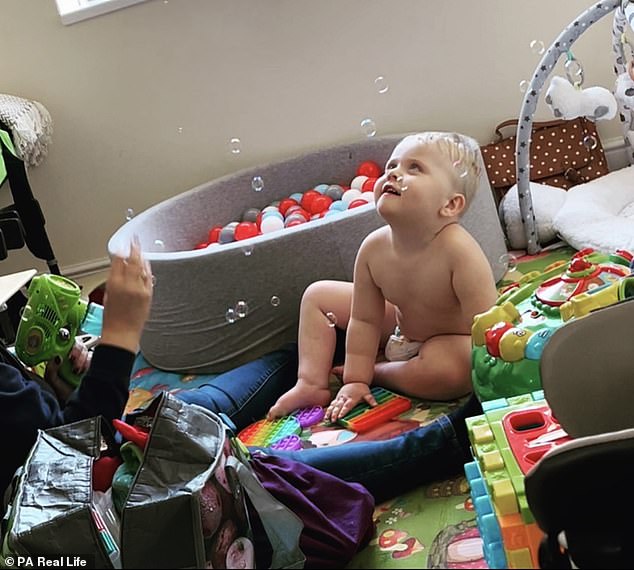 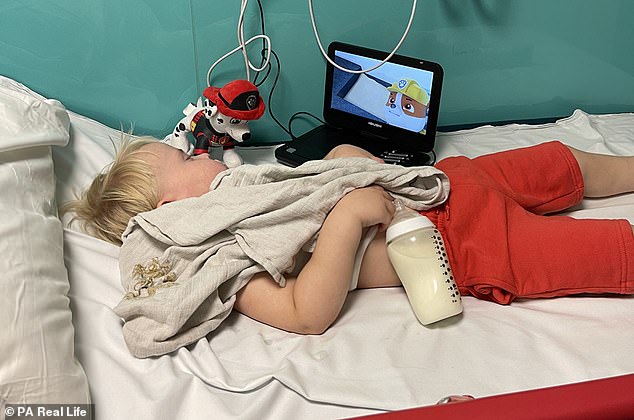 Ronnie spends much of his time in hospital with his condition, which is considered extremely rare

“That’s why we’re so desperate for this bed, because it must be safe. It would change lives.’

Eventually Kirsty hopes to be able to scatter the house around to make it safe for Ronnie – but for now she can’t afford it.

She said: ‘Right now we don’t have the money for good stuffing, but wherever he is, we put pillows and blankets so that hopefully he will get soft somewhere.

“It would be a dream to clean up the house and make it safe for Ronnie. It’s so soul-destroying to know we can’t even do that.

“We’re trying to save his life. My stomach sinks every time I hear him headbutt a wall.

“One day I’m terrified I’ll go in and see blood everywhere, or he’ll break his neck. I live in fear of this every day.’ 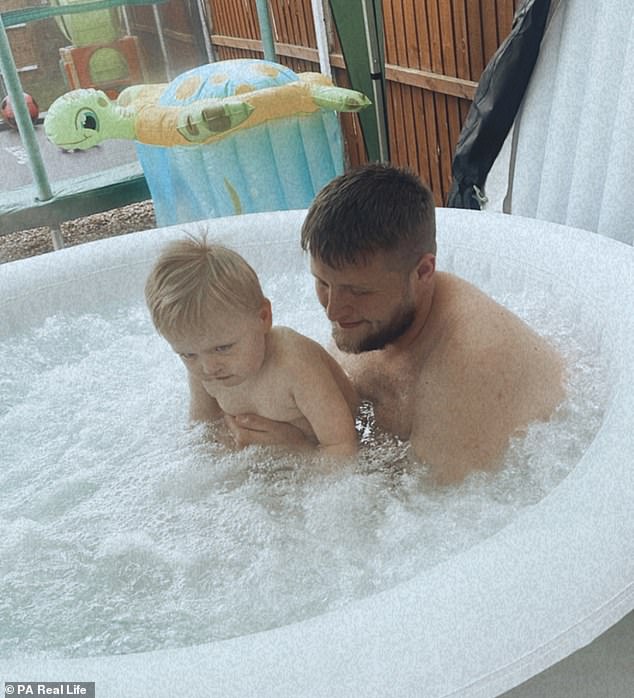 Ronnie likes water because it’s one of the few things that calms him down. His new school has a swimming pool, which mom Kirsty loves

However, there are some positives in Ronnie’s life.

This June he will start at a special education school, which Kirsty is very happy with.

She said, “School is something we’re really looking forward to. There is a pool and he loves being in the water.

“He only calms down when he’s in the water.”

Kirsty said, “He loves his trampoline. It was the best gift anyone could have ever bought him because he just bounces on his behind and smiles.

“When he’s smiling and happy, that’s the best thing there is. When he’s okay, he’s the cutest and cuddliest boy.

“I just watch him for ages. We don’t get to see that many happy moments for him, so I really cherish them.

“It makes it so much harder to know there’s a sweet boy in there, but it’s like he’s trapped.”

To date, Kirsty and Daniel have not heard that Ronnie’s life expectancy will be reduced due to his condition, although they fear that his reckless behavior may put his life at risk.

Kirsty said, “It will always be hard for him, but I’ll do everything I can to make sure he has the best life possible.”

To donate to Ronnie’s GoFundMe page.