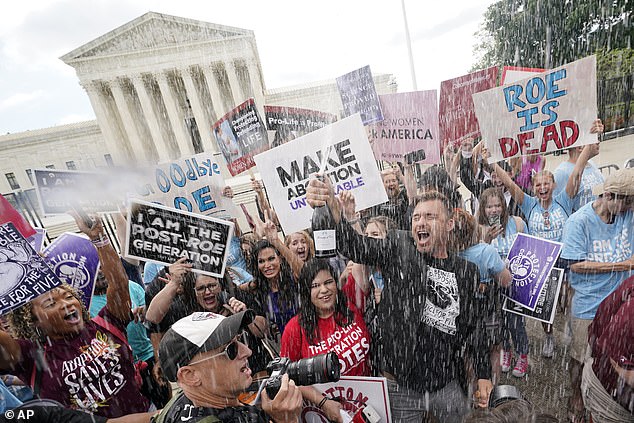 Just days before the landmark ruling that threatens to tear apart an already divided America, abortion clinic workers were taught to look for bombs and deal with “active gunmen.”

At least 11 people, including four doctors and a police officer, have been killed in violence against abortion providers in recent decades.

A celebration outside the Supreme Court, Friday, June 24 in Washington. Supreme Court has ended constitutional protections for abortion that had been in effect for nearly 50 years, a conservative majority decision to overturn the court’s groundbreaking abortion cases 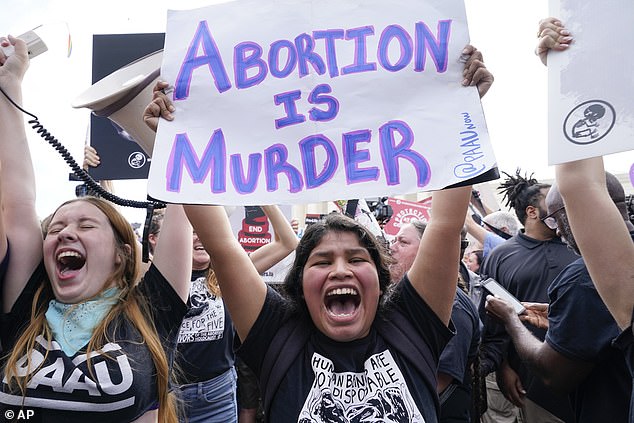 “America’s top judges have ensured that the deep polarization of this country will worsen,” said Tom Leonard

The other side – the Pro-Choice movement – ​​has also shown that it can resort to such methods.

Earlier this month, shortly after news first leaked that the conservative-dominated Supreme Court was likely to quash the historic Roe vs Wade ruling, a man armed with a gun and knife was arrested near the home of one of the judges. of the court, Brett Kavanaugh. , after making threats.

Prosecutors said the man, Nicholas Roske, was “upset” and decided to kill one of the conservative judges he held responsible. How many more could turn out to be similarly “upset”? For some, this is a war and it is likely to spread.

By ruling that there is no constitutional right to abortion and that laws can be enacted by individual states, the top US judges have ensured that the deep polarization of this country will worsen. Not least because Supreme Court justices have made it clear that yesterday’s decision could open the door for courts to overturn a series of hard-won civil rights.

“In future cases, we must reconsider all substantive precedents of this court, including Griswold, Lawrence and Obergefell,” Judge Clarence Thomas wrote, referring to decisions on contraception, gay sex and same-sex marriage.

Liberal members of the Supreme Court echoed that warning, saying in their dissent that “no one should trust that this majority is done with its work.”

With barricades being erected around the courthouse and protesters demonstrating in front of conservative members’ homes, a secret group calling itself Jane’s Revenge has been distributing threatening flyers in Washington DC.

Under the headline “DC call to Action Night of Rage,” the flyers threatened a “riot,” adding, “To our oppressors, if our abortions aren’t safe, neither are you.”

Jane’s Revenge has claimed responsibility for the devastating attacks on pro-Life “pregnancy crisis centers” – which try to convince women not to undergo terminations – in the US. Abortion providers across America are preparing for this moment — and for the tens of thousands of women who now have to travel to clinics where state laws still protect termination procedures.

President Joe Biden, whose dismal approval ratings have now plunged below 40 percent and whose party is expected to fare poorly in the November midterm elections, had seen a glimmer of hope for Democrats in the expected Supreme Court decision. Even people who aren’t pro-choice will really, really think it’s off the wall when a woman crosses a state line [to get an abortion] and she will be arrested,’ he has said.

Referring to the Republicans who have supported abortion restriction (one of them, ex-Vice President Mike Pence declared yesterday, ‘Today life wins’), the president added: ‘There are so many things these guys do that are outside of the box. mainstream from wherever the audience is.’

While there’s some truth to that — polls have consistently shown that most Americans didn’t want Roe vs Wade undone — a majority favor some limiting access to abortions. 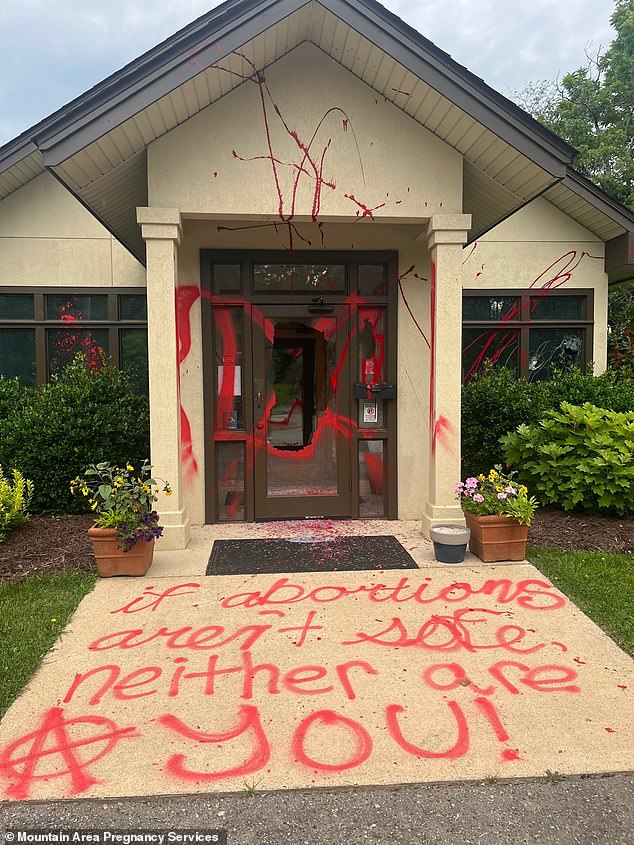 ‘If abortions aren’t safe, neither are you’: Earlier this month, shortly after news first leaked that the conservative-dominated Supreme Court would likely quash the landmark Roe vs Wade ruling, a man was armed with a gun and a knife arrested near the home of one of the judges of the court, Brett Kavanaugh, after making threats.

And just as pro-choice campaigners’ argument hinges on women’s inalienable right to choose what to do with their own bodies, many opponents of abortion see their stance as a non-negotiable article of religious belief. A 2019 poll found that 38 percent of Americans believe life begins at conception, and that proportion rises to 75 percent among Republican women.

So Mr. Biden — who believes “a woman’s right to choose is fundamental” — is misguided if he thinks yesterday’s decision will spark a backlash from outraged Republicans. It was Donald Trump who promised to overthrow Roe v Wade before coming to power in 2016.

In fact, it was the main reason many Christian conservatives overcame their distaste for his tawdry personal behavior and voted for him. And he delivered. The fact that he was able to appoint three conservative judges during his presidency was key to yesterday’s decision.

Democrats have promised to fight the Supreme Court decision tooth and nail, but their political options are limited. What happens next isn’t entirely clear, aside from the fact that 13 US states have already passed “trigger laws” that automatically ban abortion if Roe vs Wade is overturned. Others — about half of all US states — are expected to do the same soon. 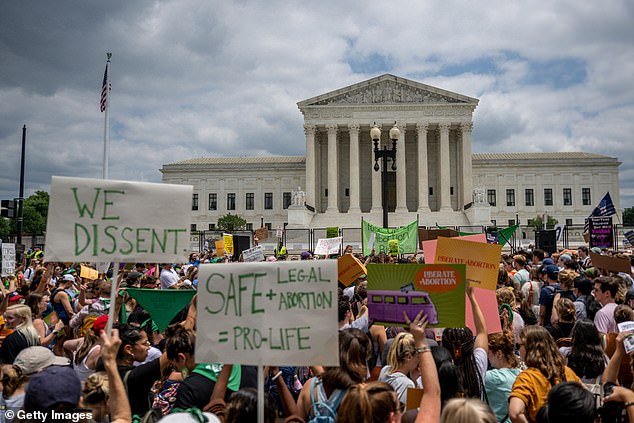 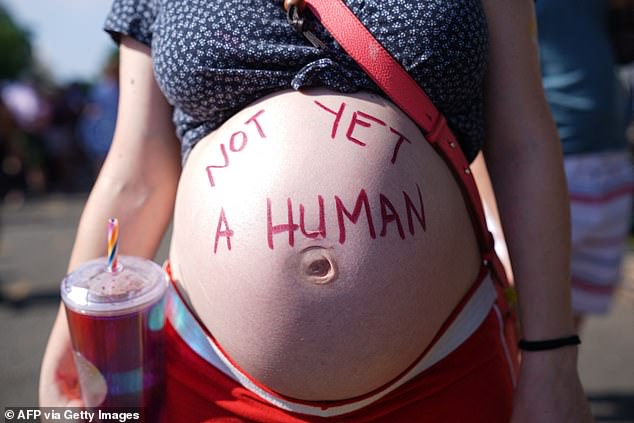 Overall, access to abortion is expected to be cut off for about 36 million women, according to Planned Parenthood research, writes Tom Leonard

In all, access to abortion is expected to be cut off for about 36 million women, according to Planned Parenthood research. Pro-Choice activists have warned that the poorest women will inevitably be hit the hardest, as they will be the least able to travel to another state or take time off from work. In response, several Democrat-controlled states have pledged to increase their funding for abortion to become “abortion shelters.” What is beyond dispute is the increasingly feverish nature of this problem. Even after the Roe vs. Wade decision in 1973 guaranteed a woman’s right to an abortion, conservative states restricted access to abortion clinics and passed laws restricting access.

There is only one abortion clinic in Missouri, and a (female) politician has introduced a new bill to ban the distribution of abortion pills and allow private lawsuits against anyone who knowingly helps a woman cross state lines to become a woman. seek termination.

Texas has similar laws, encouraging citizens to earn a $10,000 bounty by suing anyone who performs an abortion, assists in doing so — or even resembles performing an abortion in the future. More states will follow. There has even been speculation that authorities will begin monitoring women’s online activities to find out if they are pregnant and planning to have an illegal abortion.

Right to life or right to choose? How Americans choose to view abortion has never been more consistent.

How Russia Is Using Cyber ​​Warfare In Its Conflict With Ukraine

Brian Stelter OUT At CNN While New Boss Chris…