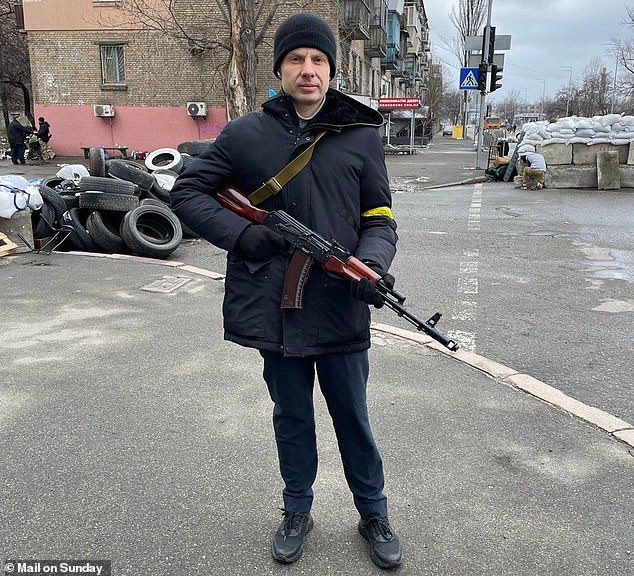 A Ukrainian lawmaker who has sacrificed his life fighting Russian troops has thanked Mel for his life-saving campaign.

Oleksey Goncharenko, who represents Podilsk in Ukraine’s southwest, now spends his days camping in a bunker near parliament in Kyiv, taking it to shift man checkpoints around the city – Putin’s His last attempt to defend the capital from the operatives.

Meanwhile his wife Olga, 43, and their sons, Alex, 16, and Cyril, 3, live in a secret location miles away from the family home.

Oleksiy Goncharenko, who represents Podilsk in the southwest of Ukraine, is now camping in a bunker near parliament in Kyiv.

Although Mr. Goncharenko is confident that Ukraine will win the war – that the “light” will overtake the “dark”, he believes the country needs all the help it can get.

He said: ‘Our army is very motivated, very prepared and fighting back really effectively.

‘I can’t tell you how courageous we all are, it brings tears to my eyes.’

But he added: ‘However, it is not just our efforts that will help defeat the monster that is Vladimir Putin.

‘We need people from the international community to help us not only with political sanctions, but with humanitarian relief.’

Last night, praising the Daily Mail and Mail on Sunday’s campaign, he said: ‘I am extremely grateful for this important initiative, which sees the British public making donations to those in need hundreds of miles away in my country.’

He continued: ‘It helps a lot to know that people are thinking of us, and that we have not been abandoned.’

OLEKSII GONCHARENKO: We are locked in a battle between light and darkness, and I truly believe that light will eventually prevail

Ukrainians have been ready to defend themselves against Russia for some time now.

Over the years, we have become accustomed to walking behind red arrows painted on buildings pointing to Soviet bomb shelters on our way to enjoy drinks with family and friends in the country’s vibrant city centers.

They are a reminder that a war against one of the world’s most unpredictable superpowers can happen at any time, but it is something, sadly, that we have learned to live with.

A few weeks ago, when Putin was threatening invasion, I thought he was blackmailing us and the world, but I never thought he would start this devastating war that is now every moment in the hearts and minds of my country. clings to. 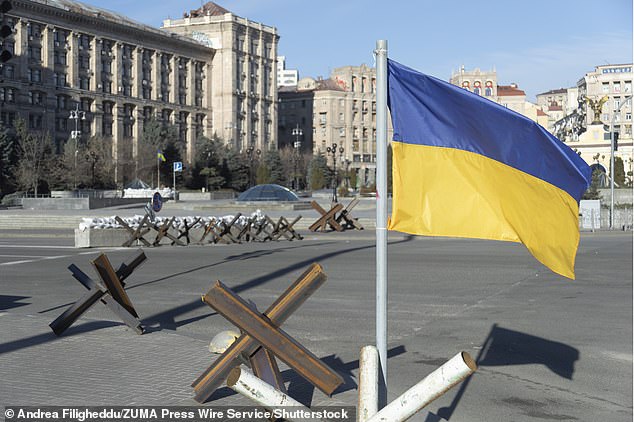 I was in Kyiv performing my duties as a Ukrainian MP for the Podilsk region when my wife called me at 5 a.m. to inform her that she was ready to leave our home in Odessa.

It was one of the most painful moments of my life.

Our home is known to be enemies, so I instructed my wife, Olga, 43, and our sons, Alex, 16, and Cyril, 3, to flee as soon as possible to a safe area of ​​Ukraine to be with family or friends. Gave.

We left everything in that house, saving a few suitcases of clothes and some toys and books for the little one.

My eldest son, Alex, did not want to leave and begged me to stay, believing that the conflict would soon end.

It is not easy for a father to tell his son that they do not know when the war will end.

It is not easy asking her to take care of my mother and my younger brother as much as possible while I am away.

My youngest child still asks me everyday when ‘Daddy’ will return with him from the capital.

And the frightening truth is, I don’t know. Sometimes I’m afraid I’ll never see them again.

Right now, I am working as part of the civil militia, and am based at a small bunker that we have built near the Parliament House. 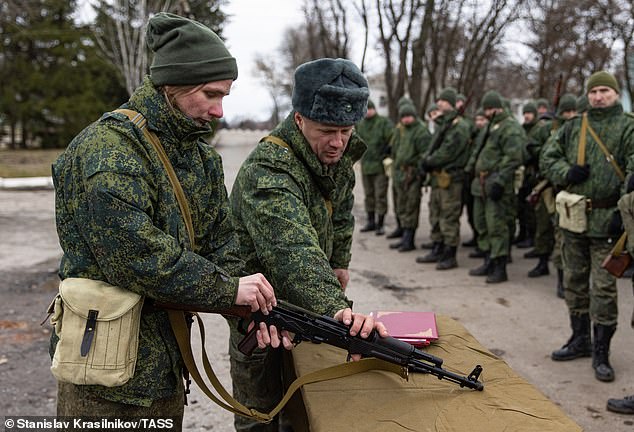 Readers of Mail Newspapers and MailOnline have always shown immense generosity in times of crisis.

Invoking that human spirit, we are now starting an appeal to raise funds for refugees from Ukraine.

Because, of course, one cannot but be struck by the heartbreaking images and stories of families – mostly women, children, the infirm and the elderly – fleeing Russia’s invading armed forces.

As the number of sufferings increases in the days and months to come, these innocent victims of the tyranny will need housing, school and medical aid.

All donations to Mail Ukraine Appeal will be distributed to charity and aid organizations providing such essential services.

to append gift Aid For a donation – even one already made – complete an online form found here: mymail.co.uk/ukraine

Via Bank Transfer, please use these details:

to donate via check

to donate from usa

US readers can donate to Appeal to Affiliate Newspapers via bank transfer or by sending a check to DailyMail.com Headquarters located at 51 Astor Place (9th Floor), New York, NY 10003.

For the first two days of fighting, I and eight other MPs were forced to sleep in a small room here, on yoga mats, wash ourselves in the sink and eat breakfast instead of a proper meal as heavy shelling was taking place outside. Was. The lack of actual food didn’t really matter to most of us, as we were running out of adrenaline. Now I am staying in my own flat in the evening.

In the morning, I wake up and call the family to make sure they are fine.

We do my best to discuss ordinary things like the weather, and I continue to watch my eldest son Alex do his math and physics homework instead of endlessly scrolling through social media and watching the news. When I talk to my wife, we try to stay strong, but sometimes she cries under the pressure of all this, because she fears that her husband might be the next victim of this brutal war.

It is something that, as a soldier of this war, I cannot take the time to think.

During the day I go to the base and meet my colleagues, who are now part of the militia.

We man it in shifts to the checkpoints and check the cars for Russian soldiers. Sometimes I will go to the Parliament to vote.

Surrounded by bags of sand, security forces stand ready to defend the building with their guns, making it appear like a small fort.

The incredible destruction of Kharkiv shows why this is necessary, but I am hopeful that we will win this war.

Our army is very motivated, very prepared and fighting back really effectively.

I can’t tell you how courageous we all are, this brings tears to my eyes.

We are locked in a battle between light and darkness, and I truly believe that light will win.

Personally, I know speaking up has a target on my back.

Putin has already tried to assassinate me in 2015 and kidnap me in 2017, so this is nothing new and it doesn’t scare me anymore.

We feel that we are doing the right thing to save not only ourselves, our country, but the whole world from this and we will never give up.

But it is not just our efforts that will help defeat the monster that is Vladimir Putin.

We need people from the international community to help us not only with political sanctions, but also with humanitarian relief.

That’s why the Daily Mail and Mail Sunday campaigns are so important.

I am so grateful for this important initiative that the British public is giving to those in need hundreds of miles away in my country. I keep hearing horrifying stories, with a very disturbing one about a couple recently killed in Kharkhiv, leaving behind their one-day-old twin girl and boy.

Those little kids are orphans right now, and they need all the help they can get.

Secondly, Mail’s campaign is also very symbolic. It helps a lot to know that people are thinking of us, and that we are not left out.

I know times are tough for many people, but I want to ask everyone to help us.

If you can donate, imagine that now there are people for whom just a piece of bread can help.

If you can’t donate to the campaign, pray for us, if you can’t, share some info about what’s going on here.