Thousands of people suffering from painful and recurring bladder infections miss a simple antiseptic treatment that destroys the bacteria in the urine.

The tablet — methenamine hippurate — evades increasingly common problems with traditional antibiotic treatments that can damage the liver and kidneys or even become useless in the face of antibiotic-resistant bacteria.

Also known by the brand name Hiprex, studies show it can be just as effective at fighting stubborn infections as antibiotics. However, experts warn that too few patients benefit from it due to outdated prescribing guidelines and many doctors may not even know it exists as an alternative.

Every year, more than a million Britons, 80 percent of whom are women, get a bladder or urinary tract infection (UTI). Symptoms include burning pain when urinating, frequent urination, and a feeling of needing to go to the bathroom even when the bladder is empty.

Older people are more at risk because with age the bladder doesn’t work as well and may not empty completely when they go to the toilet, leaving bacteria in the urinary tract.

Thousands of people suffering from painful and recurring bladder infections miss a simple antiseptic treatment that destroys the bacteria in the urine. The tablet – methenamine hippurate – evades increasingly common problems with traditional antibiotic treatments that can damage the liver and kidneys or even become useless in the face of antibiotic-resistant bacteria

Postmenopausal women are also more susceptible because the female sex hormone estrogen helps maintain the tissues of the lower urinary tract and, as levels drop, they become more vulnerable to infection.

One in ten women over 65 and almost three in ten women over 85 have had a urinary tract infection in the past year. In elderly patients, they can cause a dementia-like condition called delirium, and there is also a risk of sepsis, leading to about 10,000 deaths per year.

For most, a short course of antibiotics clears up the infection within days, but as many as 1.6 million people in the UK suffer from chronic urinary tract infections – classified as three or more infections per year.

The first-line treatment for these patients is to remain on low-dose antibiotics permanently, but about a fifth experience side effects that can damage the liver and kidneys. Antibiotics are also becoming less effective because the bacteria become resistant to the drugs. 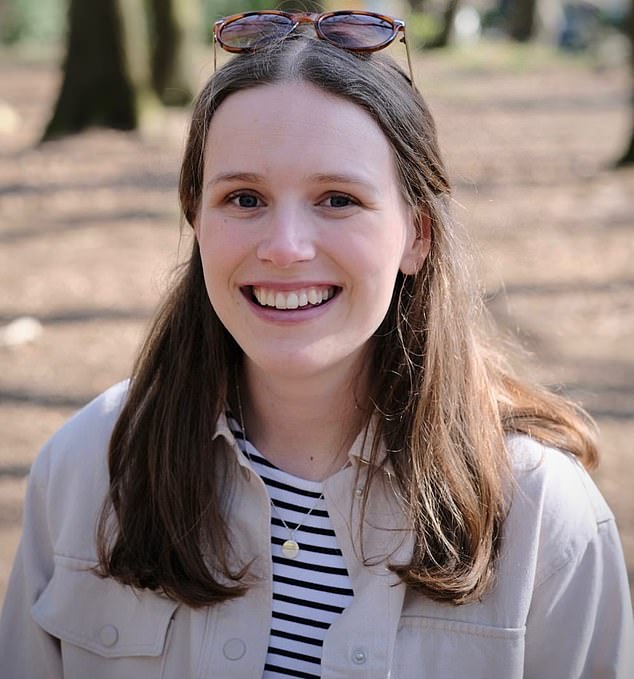 “Hiprex has changed my life,” says Helen Rawnsley (above), 27, of Birmingham. She was prescribed the drug by a private urologist in October 2020 when antibiotics stopped working after three months of suffering from repeated urinary tract infections.

Hiprex offers an alternative option for these patients. The drug is broken down by the body, releasing ammonia and formaldehyde that inhibit bacterial growth — and experts believe the pathogens that cause UTIs are unable to develop resistance to them.

Reports from women suffering from chronic urinary tract infections suggest that the drug is highly effective.

“Hiprex has changed my life,” said Helen Rawnsley, 27, of Birmingham. She was prescribed the drug by a private urologist in October 2020 when antibiotics stopped working after three months of suffering from repeated urinary tract infections.

“It was hell,” she says. “I remember collapsing and thinking, ‘I can’t live like this.’ Her last bout of severe symptoms was in June 2021. Since then, she has been taking two Hiprex tablets every day.

However, not all women have access to the drug as quickly as she does. This paper has heard the stories of countless women who are either unable to get a prescription for Hiprex or can’t get their pharmacist to sign a prescription even if it is provided by a urologist consultant.

dr. Cat Anderson, a women’s health expert who runs a clinic in London that specializes in recurrent urinary infections, echoed a claim by some experts contacted by The Mail on Sunday that it’s common for GPs to have never heard of methenamine.

She adds: ‘Many doctors, general practitioners and pharmacists are uncomfortable with prescribing methenamine hippurate because of a lack of knowledge about how it works.

What’s the difference… between efficacy and effectiveness?

The terms are often used synonymously. However, in a medical context, they have very different meanings.

In general, efficacy refers to how well drugs or other interventions perform in clinical trials.

For example, the study results of a new vaccine could show that it has an efficacy of 80 percent — meaning those who had the shot had an 80 percent lower risk of infection than those who didn’t.

Effectiveness, in medicine, refers to how well a treatment performs in the real world.

This is because that same new vaccine can gradually become less potent over time – as we saw with Covid, which was due to the decline in protective antibodies and the virus mutating. It could then be considered to be, say, only 30 percent effective.

‘From the 1950s, antibiotics were seen as a kind of miracle cure and other treatments were pushed into the background. But we now know that antibiotics alone are not enough to treat many chronic urinary tract infections.’

Guidelines prepared by Britain’s drug watchdog, the National Institute for Health and Care Excellence (NICE), state that methenamine hippurate is “less effective” than antibiotics for treating recurrent UTIs. However, this is based on an outdated 2016 study.

A 2019 review suggested it was effective, especially in middle-aged and older women, while another study, published earlier this year, concluded that women taking methenamine hippurate had, on average, no more than one additional urinary tract infection per year than those on antibiotics.

Professor Chris Harding, a consultant urologist at Newcastle Hospitals NHS Trust who led the trial, said he was optimistic the results could encourage a shift in prescribing guidelines.

Mother of two Lisa Walton, 50, of Fleet, Hampshire, has privately spent thousands of dollars on methenamine over the past five years because her NHS GP refuses to prescribe it.

Before that, Lisa tried multiple courses of antibiotics, saw a series of doctors, and even had surgery to enlarge her urethra — the narrow tube through which urine leaves the body — to keep bacteria from getting trapped.

She says methenamine has been absolutely crucial to her recovery, adding, “I’m grateful I can afford it, but it’s absolutely vital that more people have access to it.”

Some primary care physicians have refused to prescribe methenamine for long-term use because of the potential health risks of the release of formaldehyde, a known carcinogen — something that could cause cancer.

However, Prof Harding believes the levels of formaldehyde are too low to pose a risk, while Dr. Anderson says the benefits of taking methenamine far outweigh this risk, adding, “Patients with chronic UTIs suffer from hell. Many would see improvements if only they could get their hands on this drug.”

How do I get the water out of my ears after swimming?