What time is the minute of silence for the Queen’s funeral? 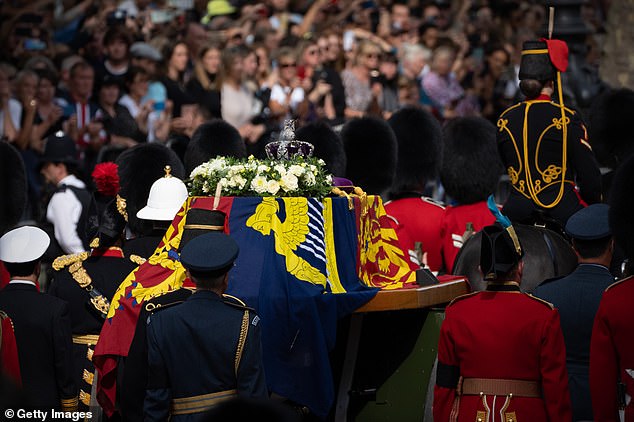 Millions of people across the UK are being called upon to observe two minutes of silence during the closing moments of the Queen’s funeral on Monday – as part of a double moment of nationwide reflection in honor of Her Majesty.

The plea comes as Buckingham Palace today revealed new details about the historic commemoration, which entertainment experts predict will become the most-watched television event in history, watched by billions of people around the world.

The two-minute silence will be held Monday at 11:55 a.m., during the closing chapter of Her Majesty’s state funeral – echoing a one-minute tribute scheduled at 8 p.m. the night before.

King Charles III will once again march with his family behind the Queen’s coffin when it moves from Westminster Hall to Westminster Abbey at 10:44am on Monday for the Queen’s funeral service.

He will accompany the Princess Royal, Duke of York and Earl of Wessex and behind the quartet are the Queen’s grandsons, Peter Phillips, Duke of Sussex and the Prince of Wales.

A two-minute silence marks the end of the Queen’s funeral on Monday – with a minute of silence at 8pm the night before. It comes after thousands of people watched Her Majesty’s casket being carried from Buckingham Palace to the Palace of Westminster on Wednesday. 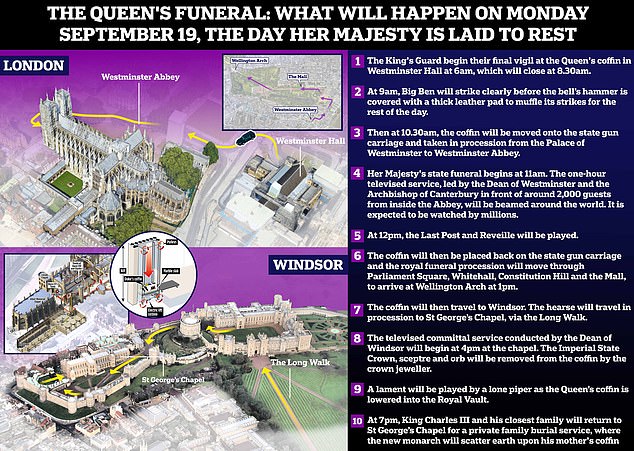 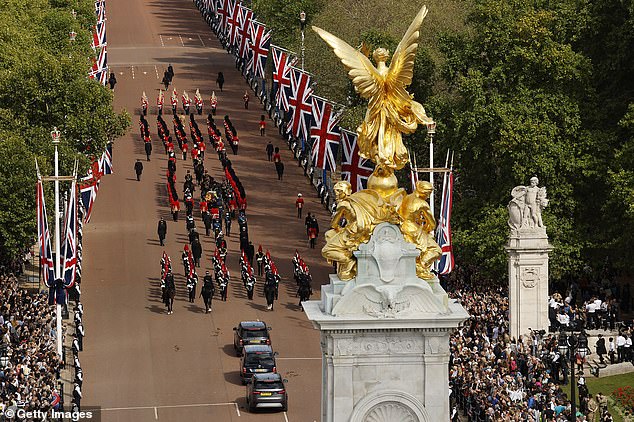 More than a million people are expected to travel to London to witness the state funeral, which is far fewer than the number seen at Wednesday’s ceremonies in the capital.

They are followed by Vice Admiral Sir Tim Laurence, the late monarch’s son-in-law, the Duke of Gloucester, the Queen’s cousin and her cousin the Earl of Snowdon.

Her Majesty’s coffin will be carried to Westminster Abbey by a 123-year-old gun carriage drawn by 98 Royal Navy seamen.

More than a million mourners are expected to line the streets of London to witness the spectacle, with countless more following the live coverage from home.

The procession will arrive at the west gate of Westminster Abbey at 10:52 a.m., when the porters will lift the coffin from the coach and carry it to the abbey for the state funeral, the Earl Marshal said.

The service begins at 11 a.m. and is led by the Dean of Westminster.

The Prime Minister and Secretary General of the Commonwealth will read Lessons, while the Archbishop of York, the Cardinal Archbishop of Westminster, the Moderator of the General Assembly of the Church of Scotland and the Free Churches Moderator will pray.

The sermon will be delivered by the Archbishop of Canterbury who will also give the praise, while the Dean will give the blessing.

Then, around 11:55 a.m., the Last Post will sound, bringing the nation to a halt as two minutes of silence are observed at the abbey. 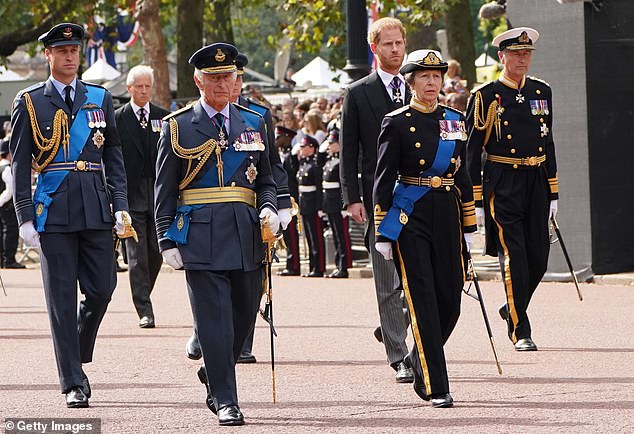 King Charles looks tearful as he marches yesterday with Prince William, Prince of Wales, Prince Harry, Duke of Sussex, Anne, Princess Royal and her husband Vice Admiral Sir Tim Laurence. The family is marching behind the coffin again on Monday after the state funeral 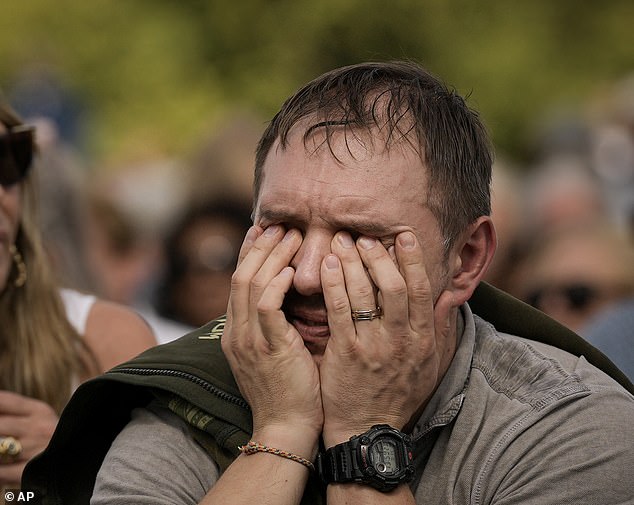 Reveille, the national anthem and a lament played by the bagpiper bring the state funeral to an end around noon.

The silence follows a one-minute tribute on Sunday evening to ‘mourn and reflect on the life and legacy’ of Britain’s longest serving monarch, which will be performed at 8pm.

After the funeral service on Monday, the Queen’s casket will be returned to the carriage by the bearer company and a procession will travel to Wellington Arch in Hyde Park.

The King and the royal party will occupy the same place behind the coffin as when they brought him to the abbey, while the Queen Consort and Princess of Wales will travel to the place by car, as will the Duchess of Sussex and the Countess of wessex.

The route will be lined by the armed forces from Westminster Abbey to the top of Constitution Hill at the Commonwealth Memorial Gates.

The procession consists of seven groups, each supported by a maidservant. Mounties from the Royal Canadian Mounted Police will lead the way, followed immediately by representatives from the Royal Ulster Constabulary, NHS, along with detachments from the Commonwealth Armed Forces.

At Wellington Arch, the Royal Family will watch as the Queen’s casket is transferred to the new state hearse, details of which have been approved by the Queen, before it embarks on its journey to Windsor Castle. 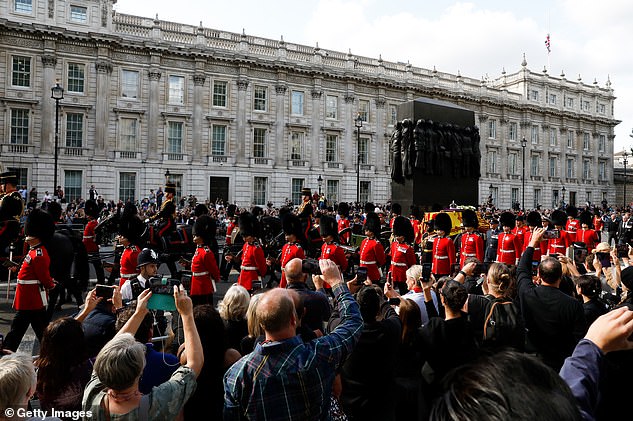