Prince Harry and Meghan Markle’s children Archie and Lilibet may not be granted HRH status even though they have now become a prince and princess – because they will not be working royals, an expert said today.

The Duke and Duchess of Sussex’s three-year-old son Archie Mountbatten-Windsor is now Prince Archie, while his one-year-old sister is Princess Lilibet – although it is not clear whether these new titles will actually be used.

And a report today has claimed that following ‘tense discussions’ between the new King and the Sussexes over recent days, Harry and Meghan have been left ‘furious’ that their children will not also now get HRH titles.

When Archie and Lilibet were born they were too far down the line of succession to receive the titles, due to rules from King George V in 1917. But the death of the Queen means they are now the grandchildren of the monarch, rather than the great-grandchildren, and are entitled to be addressed as prince and princess, and to use HRH.

Harry and Meghan remain the Duke and Duchess of Sussex, and their titles will not change. The couple have stopped using HRH styles since they quit their roles as senior working royals in 2020, but still retain them.

However, while Prince Andrew no longer uses the status HRH, his daughters Princesses Beatrice and Eugenie still both have the title – which stands for His or Her Royal Highness – despite not being working royals.

While confirmation is awaited on whether Archie and Lilibet will receive HRH titles, royal expert Phil Dampier told MailOnline today that allowing them become a Prince and Princess but not HRH ‘would be a classic compromise’. 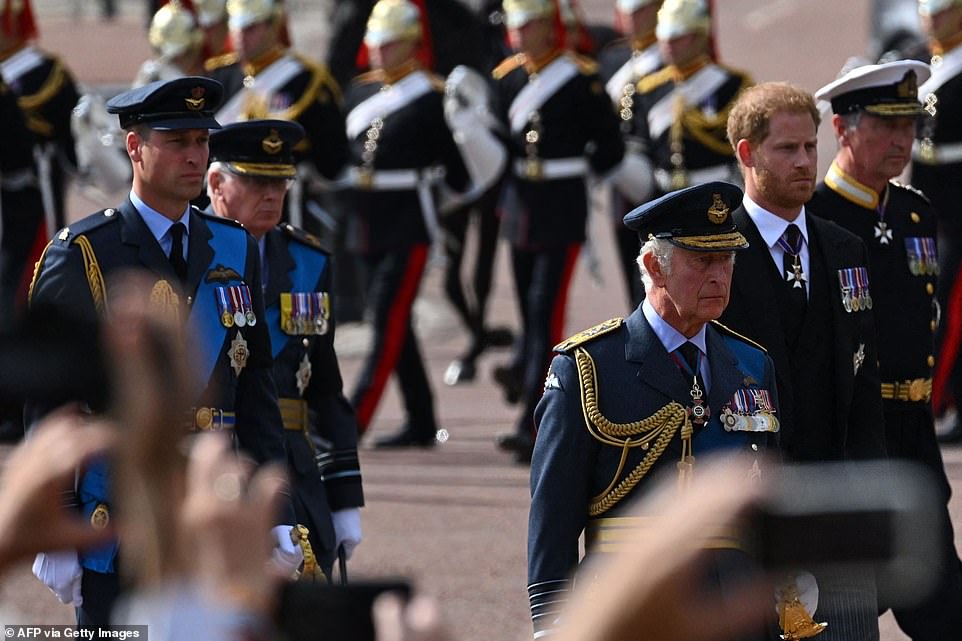 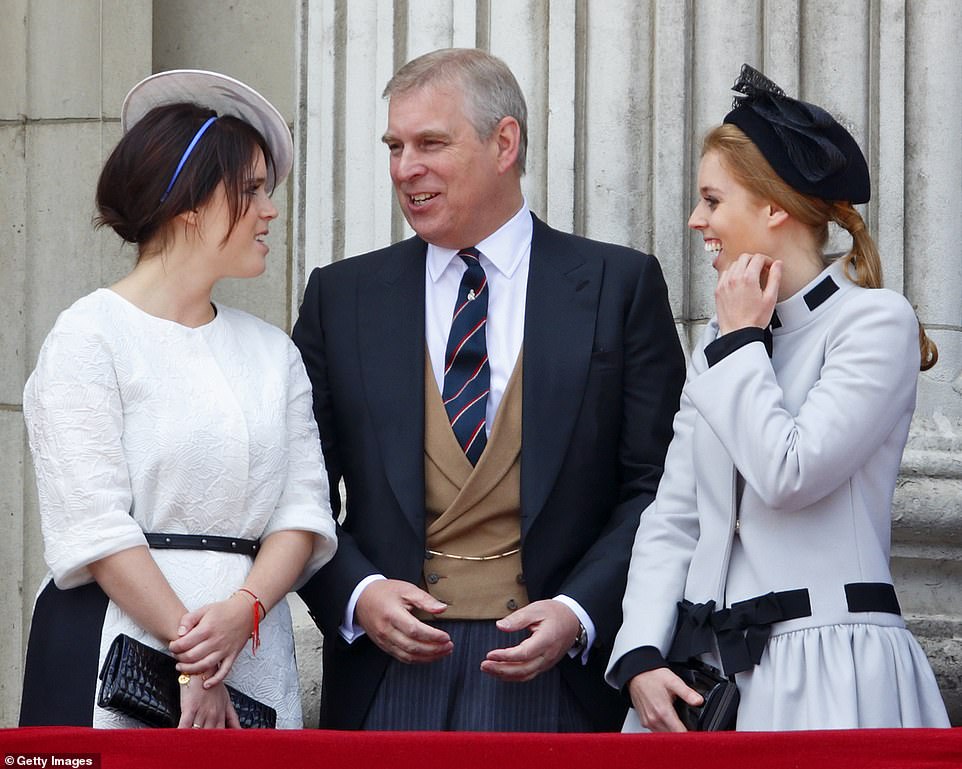 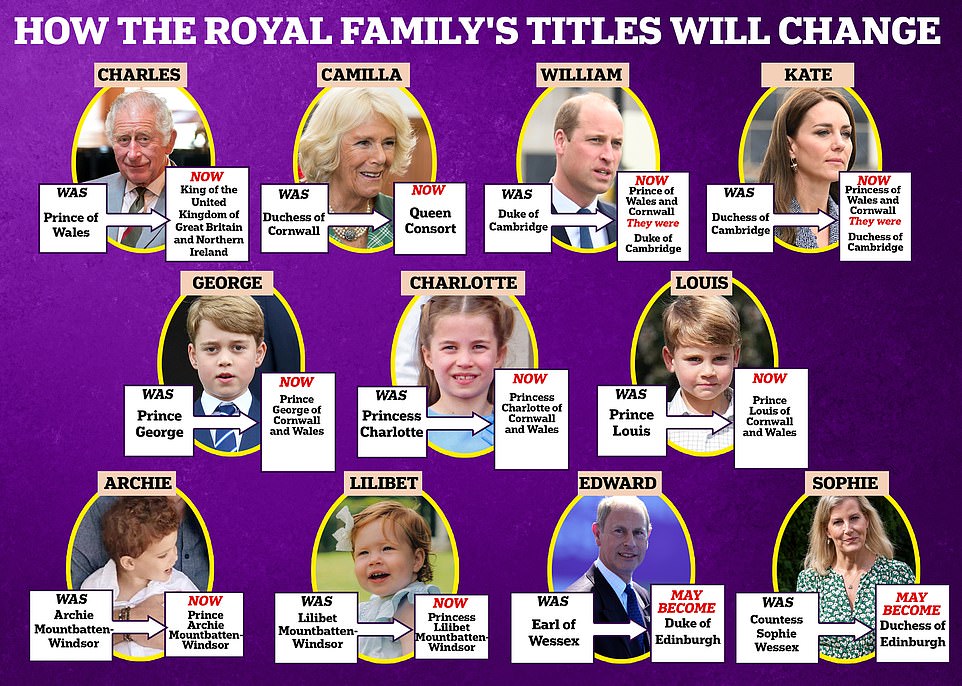 Members of the royal family are seeing a title change following the death of Britain’s longest reigning monarch, The Queen

He said: ‘The same thing happened to Diana and Fergie after they were divorced from Charles and Andrew. And of course Sarah Ferguson is still the Duchess of York today.

‘Harry and Meghan should be pleased as using Prince or Princess sounds good in the States. But even though their children are still high up in the line of succession they will not be working royals, so it’s quite right they shouldn’t have titles.

Which Royal Family members are HRH?

The following members of the Royal Family are HRH:

The following members of the Royal Family are technically entitled to HRH but do not use it:

‘Lots of people think Harry and Meghan themselves should lose their titles, so I think they should just accept this compromise and be grateful – as it could be a lot worse for them and their children.’

It comes after a source told The Sun : ‘Harry and Meghan were worried about the security issue and being prince and princess brings them the right to have certain levels of royal security. There have been a lot of talks over the past week.’

The source added: ‘But they have been left furious that Archie and Lilibet cannot take the title HRH. That is the agreement – they can be prince and princess but not HRH because they are not working royals.’

In March 2021, during Harry and Meghan’s bombshell interview with Oprah Winfrey, the couple suggested that Archie might be blocked from becoming a prince.

Meghan spoke of her shock at being told Archie would not get police protection because he did not have a title, and claimed he might receive different treatment to the other children of the Royal Family.

She was asked if she believed that was due to race, and replied: ‘In those months when I was pregnant, all around this same time, so we [had] the conversation of he won’t be given security, he’s not going to be given a title.

‘And, also, concerns and conversations about how dark his skin might be when he’s born.’

Archie was allowed to become Earl of Dumbarton, one of his father’s subsidiary titles, when he was born, or could have been Lord Archie Mountbatten-Windsor.

Buckingham Palace said his parents made a personal decision he should be Master Archie instead.

In the Oprah interview, Harry and Meghan indicated that they had been told protocols would be changed once Charles became King, so that Archie would be excluded from becoming an HRH and a prince. The interview was given before Lilibet was born. 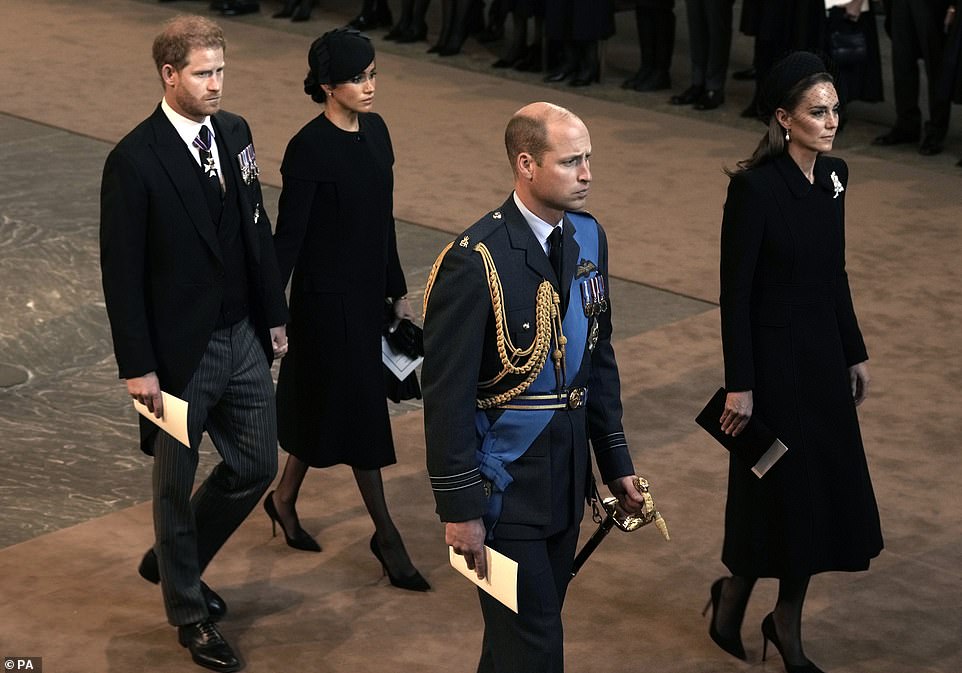 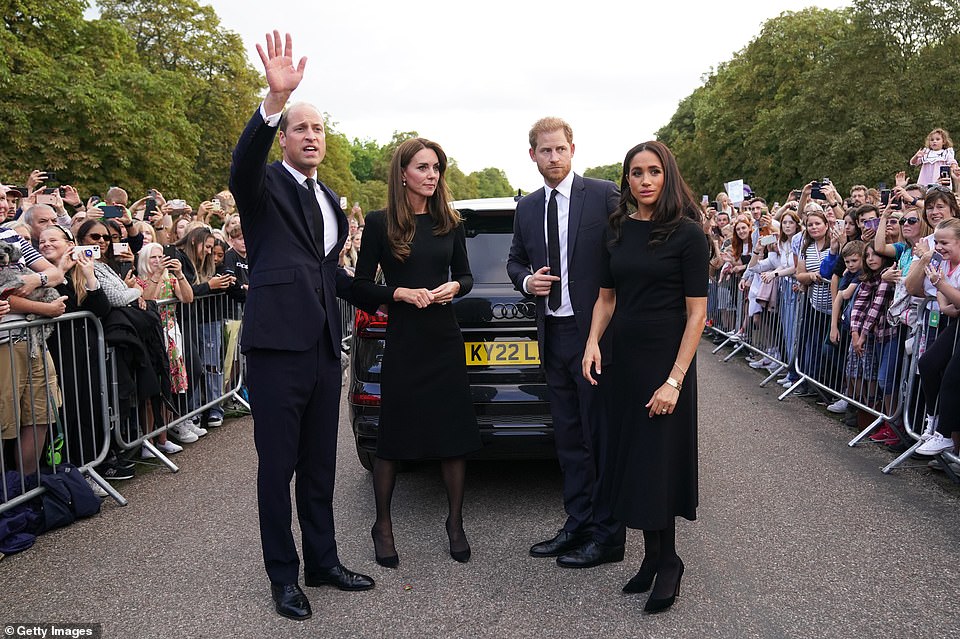 Charles is known to favour a slimmed-down monarchy, but there has been no suggestion he will take such a decision. It is not known if Harry and Meghan want Archie and Lili to be addressed as a prince and princess.

The rules on HRH – His or Her Royal Highness – titles in the modern royal family can be traced back to the founder of the House of Windsor, King George V, who issued Letters Patent in 1917 which restricted their use.

He declared: ‘The grandchildren of the sons of any such Sovereign in the direct male line (save only the eldest living son of the eldest son of the Prince of Wales) shall have and enjoy in all occasions the style and title enjoyed by the children of Dukes of these Our Realms.’

This means both of King Charles III’s children – Prince William and Prince Harry – are entitled to be HRH. While William uses this title, Harry has not since he quit as a senior working royal in early 2020, but still retains it.

A monarch’s grandchildren in the male line are also HRH, which applies to William and Kate Middleton’s children Prince George, Princess Charlotte and Prince Louis.

It technically therefore also applies to Harry and Meghan Markle’s children Prince Archie and Princess Lilibet – but they are not expected to get the title because the family are not working royals. Buckingham Palace said in March 2020 that Harry and Meghan would not use HRH.

Once someone is given an HRH title, it remains for the rest of their life even if the line changes – unless the monarch chose to issue Letters Patent to remove it.

This means William, Harry, Beatrice and Eugenie are all HRHs because they are the children of sons of Queen Elizabeth II.

Prince Edward’s children – Lady Louise Windsor and James, Viscount Severn – are also technically HRH but their parents said they would not use those titles.

Princess Anne’s children, Peter Phillips and Zara Tindall, are not entitled to be HRHs because they are the children of a daughter – not a son – of the Queen.

Charles no longer has the HRH style because he has become HM, or His Majesty. Similarly, Camilla is now no longer HRH and is instead HM, or Her Majesty.

The Duke of Kent, his sister Princess Alexandra, and his brother Prince Michael also have the title. This is because their father George, Duke of Kent, was the fourth son of King George V.

The HRH style is also passed onto a spouse – which means Queen Consort Camilla (who is now HM, not HRH); Kate; Sophie; Birgitte, Duchess of Gloucester; Katharine, Duchess of Kent; and Princess Michael of Kent all received the title after their marriages.

But the husbands of women HRHs are not entitled to the style – such as Eugenie’s husband Jack Brooksbank and Beatrice’s husband Edoardo Mapelli Mozzi.

Sarah, Duchess of York received the title after marrying Prince Andrew – but lost it following her divorce in 1996.

Harry has frequently spoken about the burden of having a title, particularly when it affected his military career. He confessed in 2017 that he had ‘wanted out’ of the Royal Family – a wish that became a reality in 2020.

The former soldier said the time he spent in the Army, when he was ‘just Harry’, was ‘the best escape I’ve ever had’ and he had considered giving up his title.

Royal author Penny Junor said: ‘He would have dearly liked to have been a normal boy growing up, and found his title very difficult.’

The duke is close to his cousins, Zara Tindall and Peter Phillips, and may have taken their experiences on board.

Zara, who grew up as Miss Zara Phillips, was not entitled to be an HRH because she was born in the female line as the offspring of the daughter of a sovereign. She has spoken of how not having a title was a blessing.

‘I’ve been very lucky. My parents didn’t give us titles, so we’ve been able to have a slightly more normal upbringing. As soon as you’ve got a title, it’s very difficult to shed it,’ she said.

Ms Junor said: ‘He [Harry] looked at Zara and Peter and it was so much easier for them than for him.

‘He was constantly the centre of attention. His friends were targeted whenever he did anything wrong or misbehaved in any way.

‘We knew nothing about Zara or Peter when they were growing up because they were ordinary children going to ordinary schools and were not being treated in any special way.’

The Earl and Countess of Wessex’s daughter, Lady Louise Windsor, and son, James, Viscount Severn, as the children of the son of a monarch, were allowed to be known as princess and prince.

But Edward and Sophie, with the Queen’s permission, decided to use the courtesy titles of an earl instead.

Speaking about the lack of HRH titles for the children, Sophie told Good Housekeeping magazine in 2020: ‘We try to bring them up with the understanding they are very likely to have to work for a living. Hence we made the decision not to use HRH titles.

‘They have them and can decide to use them from 18, but I think it’s highly unlikely.’

Meghan said she and Harry wanted Archie to be a prince so he would have security and be protected.

But being a prince or princess does not automatically mean royals have police bodyguards paid for by the taxpayer, and the Sussexes have chosen to live in the US.

Harry is currently involved in legal action over a decision to strip him and his family of automatic round-the-clock police protection when they are in Britain.

Taxpayer-funded police bodyguards are now assigned to the family on a ‘case-by-case’ basis according to security assessments.

He had a child with his mistress Lady Augusta Murray, although staff referred to the boy as Prince Augustus.

Yesterday, King Charles III led the royal family as they walked behind the Queen’s coffin, draped with a Royal Standard, adorned with the Imperial State Crown and pulled on a gun carriage of The King’s Troop Royal Horse Artillery. 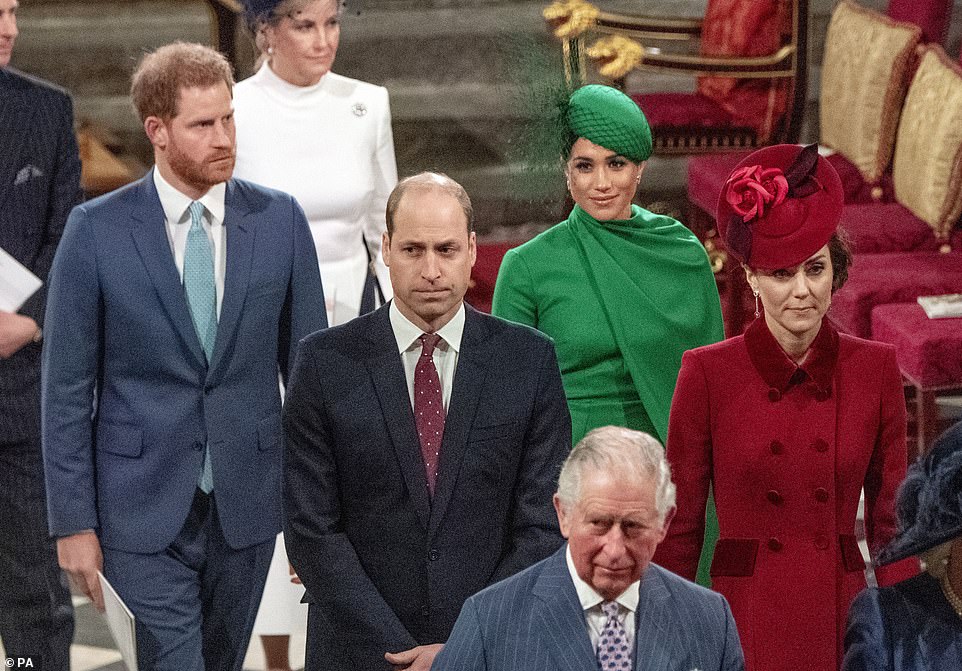 Two years have passed since William, Kate, Harry and Meghan were previously together side-by-side in public, during the Commonwealth Day church service at Westminster Abbey on March 9, 2020

Thousands of mourners flocked to see the moving sight of the Queen departing the official residence of Buckingham Palace where she spent so much of her working life, with viewing areas declared full ahead of the procession starting.

The new monarch walked in line with the Princess Royal, the Duke of York and the Earl of Wessex.

Behind the King were the Queen’s grandsons in a line – Peter Phillips, the Duke of Sussex and the Prince of Wales – who were followed by the late monarch’s son-in-law Vice Admiral Sir Tim Laurence, the Duke of Gloucester, the Queen’s cousin, and her nephew the Earl of Snowdown.

Harry and Andrew were denied the chance to wear their military uniforms and when they passed the Cenotaph the royals in uniform saluted, but Harry bowed and Andrew performed ‘eyes right’ and looked at the memorial.

MailOnline has contacted both Buckingham Palace and representatives for the Sussexes today for comment on the HRH titles.