Worn and wielded by Her Majesty on dozens of occasions throughout her reign, the Crown Jewels have a central place in the history of the English Royal Family.

Dating back to the 17th-century, the collection of jewels – which include more than 23,000 diamonds, sapphires and rubies – can only be viewed by the public from behind toughened glass at the Tower of London.

But now, a new BBC documentary which airs tonight is set to reveal the jewels in the most detail that they have ever been seen by ordinary people.

The programme, fronted by presenter Clive Myrie, was given permission to film the jewels using ultra-high quality cameras.

One stunning clip shows the Sovereign’s Sceptre with Cross – one of two that have been used at coronations since the restoration of the monarchy in 1661. Her Majesty wielded it at her own Coronation in 1953.

Also covered in the programme is the Imperial State Crown – worn once a year by the Queen at the State Opening of Parliament – and St Edward’s Crown, which Her Majesty has only worn once – at her Coronation.

Possibly the most controversial jewel in the collection is the 108-carat Koh-i-Noor diamond, which is set in the Crown of the Queen Mother.

The gem, which came into British hands during the colonial era, is the subject of a historic ownership dispute and has been claimed by at least four countries, including India.

Worn and wielded by Her Majesty on dozens of occasions throughout her reign, the Crown Jewels have a central place in the history of the English Royal Family. Above: The Imperial State Crown. A new BBC documentary is set to reveal the jewels in the most detail that they have ever been seen by ordinary people 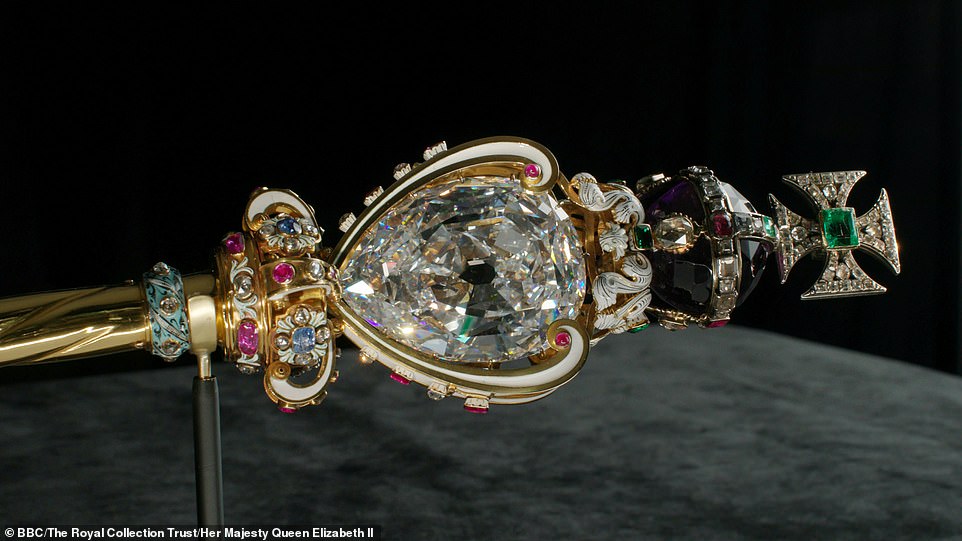 One stunning clip shows the Sovereign’s Sceptre with Dove – one of two that have been used at coronations since the restoration of the monarchy in 1661. Her Majesty wielded it at her own Coronation in 1953 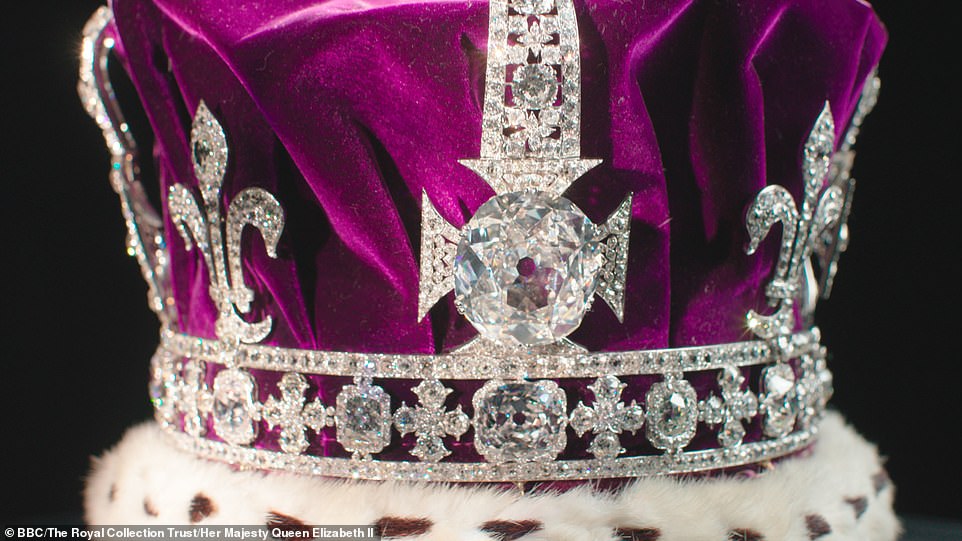 Possibly the most controversial jewel in the collection is the 108-carat Koh-i-Noor diamond, which is set in the Crown of the Queen Mother. The gem, which came into British hands during the colonial era, is the subject of a historic ownership dispute and has been claimed by at least four countries, including India 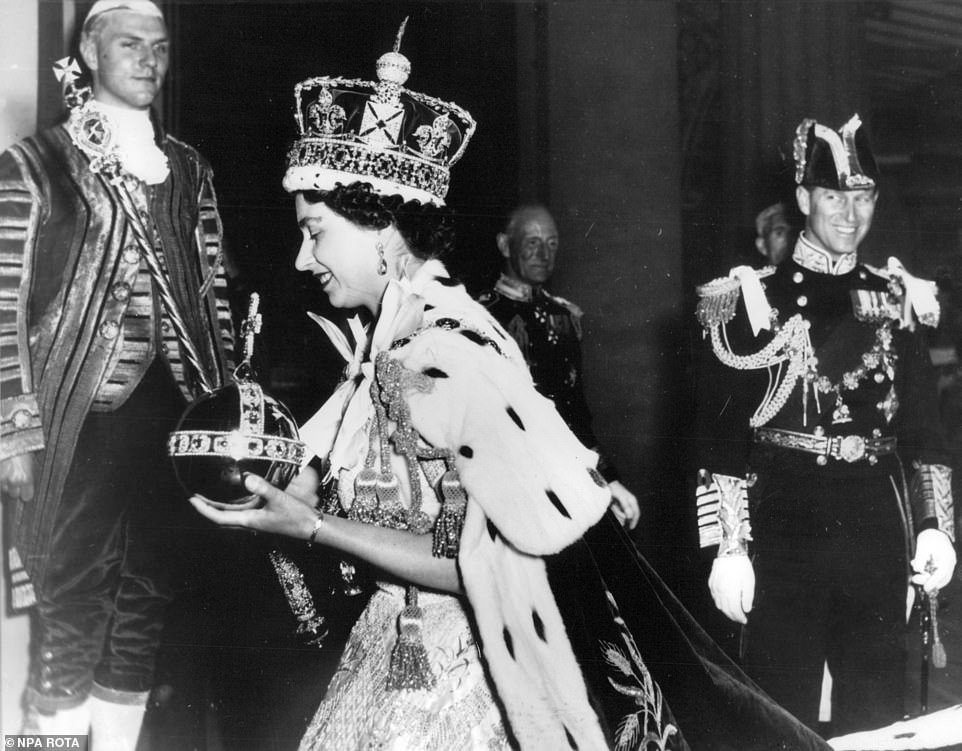 There are nearly 3,000 precious stones in the Imperial State Crown, including sapphires, emeralds and rubies.

The crown was made for Queen Victoria in 1838. It contains more than 3,000 precious stones, including 2,700 diamonds.

The most historically significant stones in it include the Sapphire of Edward the Confessor, which was taken from the coronation ring of Edward.

With Edward having been crowned in 1042, it is the oldest stone in the entire royal collection.

The crown also boasts the Stuart Sapphire and the Black Prince’s Ruby, along with pearls that are believed to have belonged to Queen Elizabeth I.

St Edward’s Crown, which is made from gold, is only ever worn at coronations because of the fact that it weighs five pounds (2.26kg). The crown was made for Charles II, who was crowned in 1661.

The crown is filled with purple velvet that is known as the Cap of Maintenance.

The diamond on the sceptre – the Cullinan 1 – was cut from the largest rough diamond ever found. It was discovered in a mine in South Africa in 1905.

The Koh-i-noor diamond rests in the Queen Mother’s Crown and its name means ‘Mountain of Light’ in Urdu.

The controversial diamond was first recorded in 1306. A Hindu text at the time said: ‘Only God or woman can wear it with impunity’.

Rulers fought over it for centuries before Britain took it as part of the Treaty of Lahore, when it took control of the Punjab, in 1849.

The jewel was seized by the Empire’s East India Company as one of the spoils of war and presented to Queen Victoria in 1850. 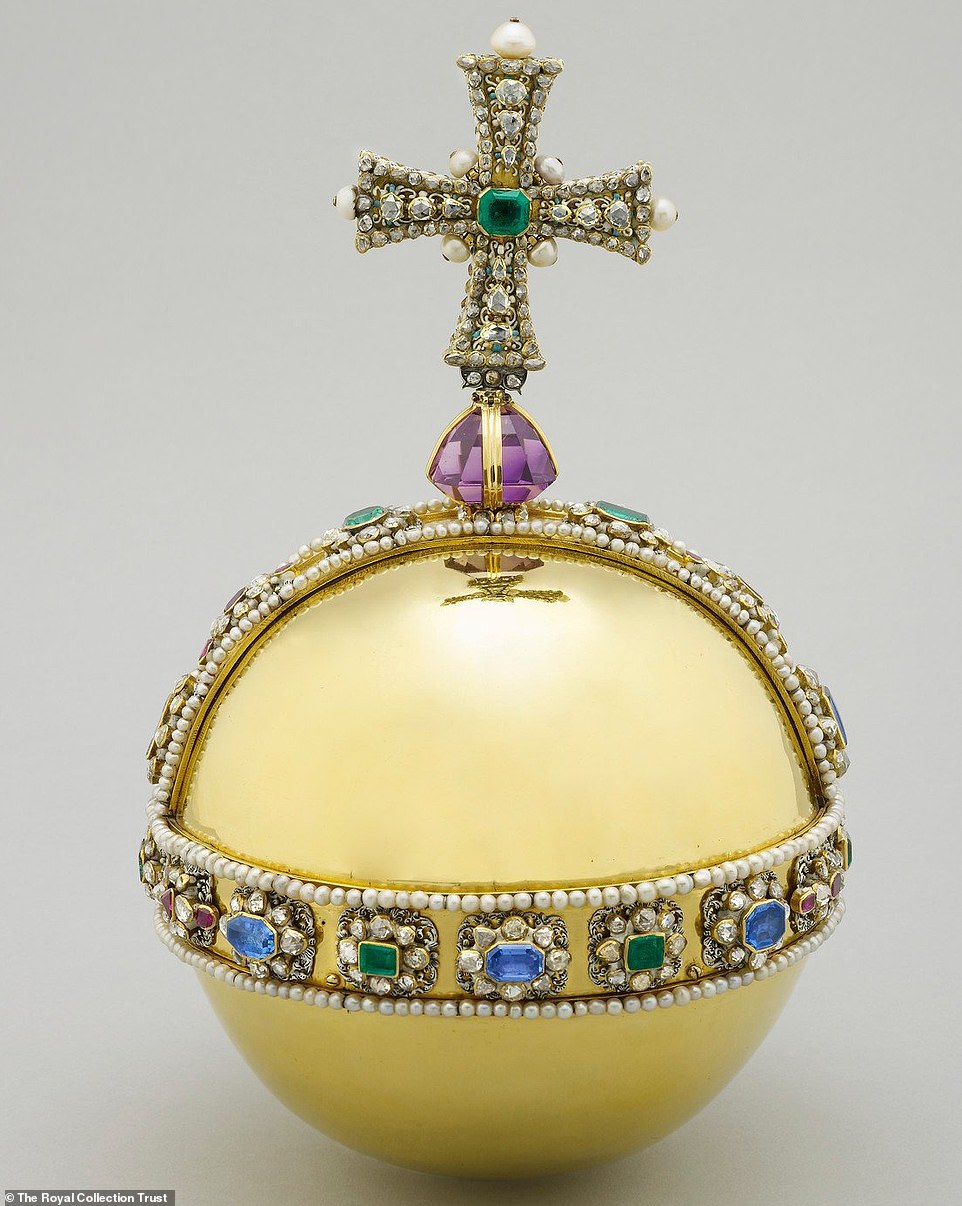 Another post-revolution addition to the Crown Jewels was the Sovereign’s Orb, which acts as the symbol of Godly power within the monarchy

Prince Albert ordered the diamond, then weighing 186 carats, be recut to improve its brilliance before it was reduced in weight by 42 per cent and cut into an oval brilliant weighing 109 carats.

The Koh-i-noor was then mounted into Victoria’s crown among 2,000 other diamonds.

It passed to consorts Queen Alexandra in 1902 and Queen Mary in 1911 for their coronation crowns and then to the late Queen Mother in 1937, being set in a Maltese Cross.

The diamond is the third largest in the Crown collection, behind the Cullinan 1 and 2 jewels cut from the Cullinan diamond – the largest rough diamond ever found. They are set in the Sovereign’s sceptre with cross and the Imperial State Crown.

Indian and Pakistani authorities have long demanded the diamond’s return.

In 1976, prime minister Jim Callaghan refused a request to hand it back saying: ‘I could not advise Her Majesty the Queen that it should be surrendered.’

Other objects that make up the Crown Jewels include the Ampulla, an eagle-shaped vessel of pure gold. It held the holy oil which used for the anointing of the Queen in 1953.

The Anointing Spoon, which dates back to the 14th-century, is used to hold the oil poured from the Ampulla.

After the execution of Charles I in 1649, Oliver Cromwell melted down the original English Crown Jewels. Any objects that could not be melted down were sold off.

It was only because of the survival of records detailing what the original jewels looked like and which objects were sold off that they were able to be faithfully recreated when the monarchy was restored in 1660.

Another post-revolution addition to the Crown Jewels was the Sovereign’s Orb, which acts as the symbol of Godly power within the monarchy.

The item was made for Charles II’s coronation in 1661 and is a 30cm-wide hollow gold sphere with a crucifix above it, adorned with nine emeralds, 18 rubies, nine sapphires, 365 diamonds, 375 pearls, one amethyst and one glass stone.

The cross remaining above the orb represents the dominion of Christ over the world with the monarch holding it as God’s representative on Earth.

The oldest part of the collection is the Scottish Crown Jewels, which date from the early 1500s. They are held at Edinburgh Castle. 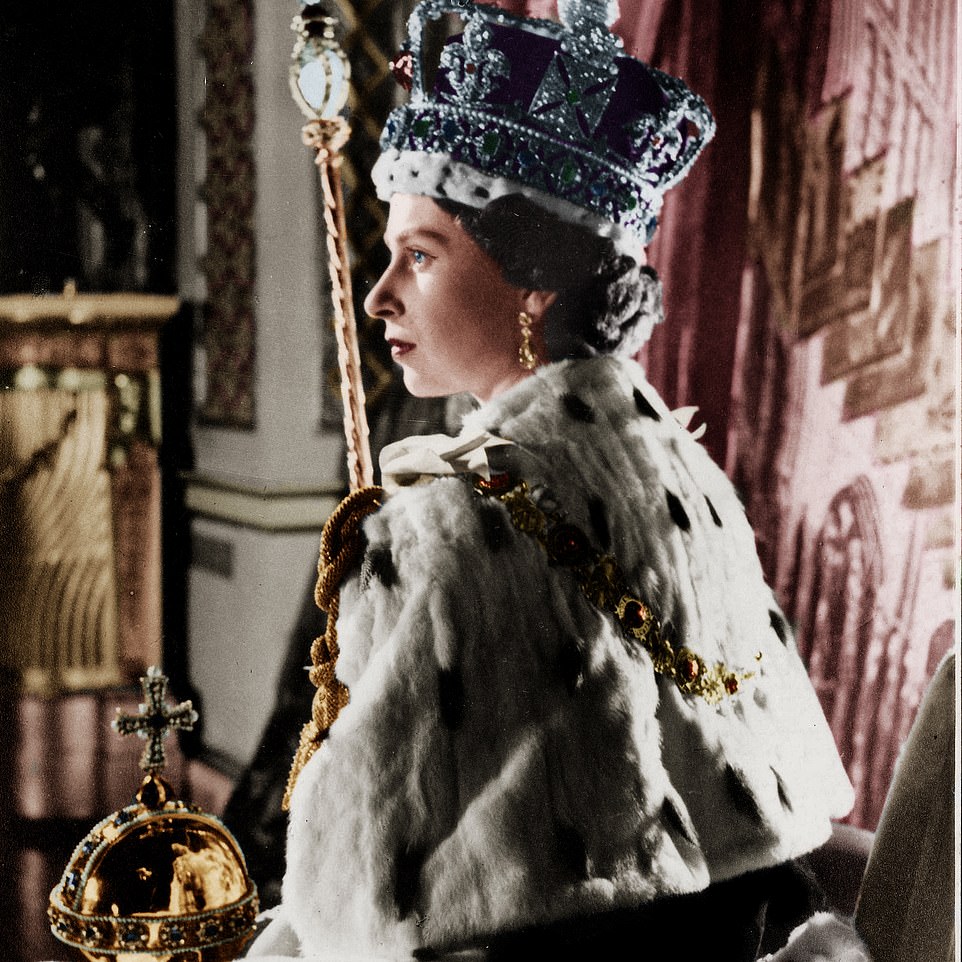 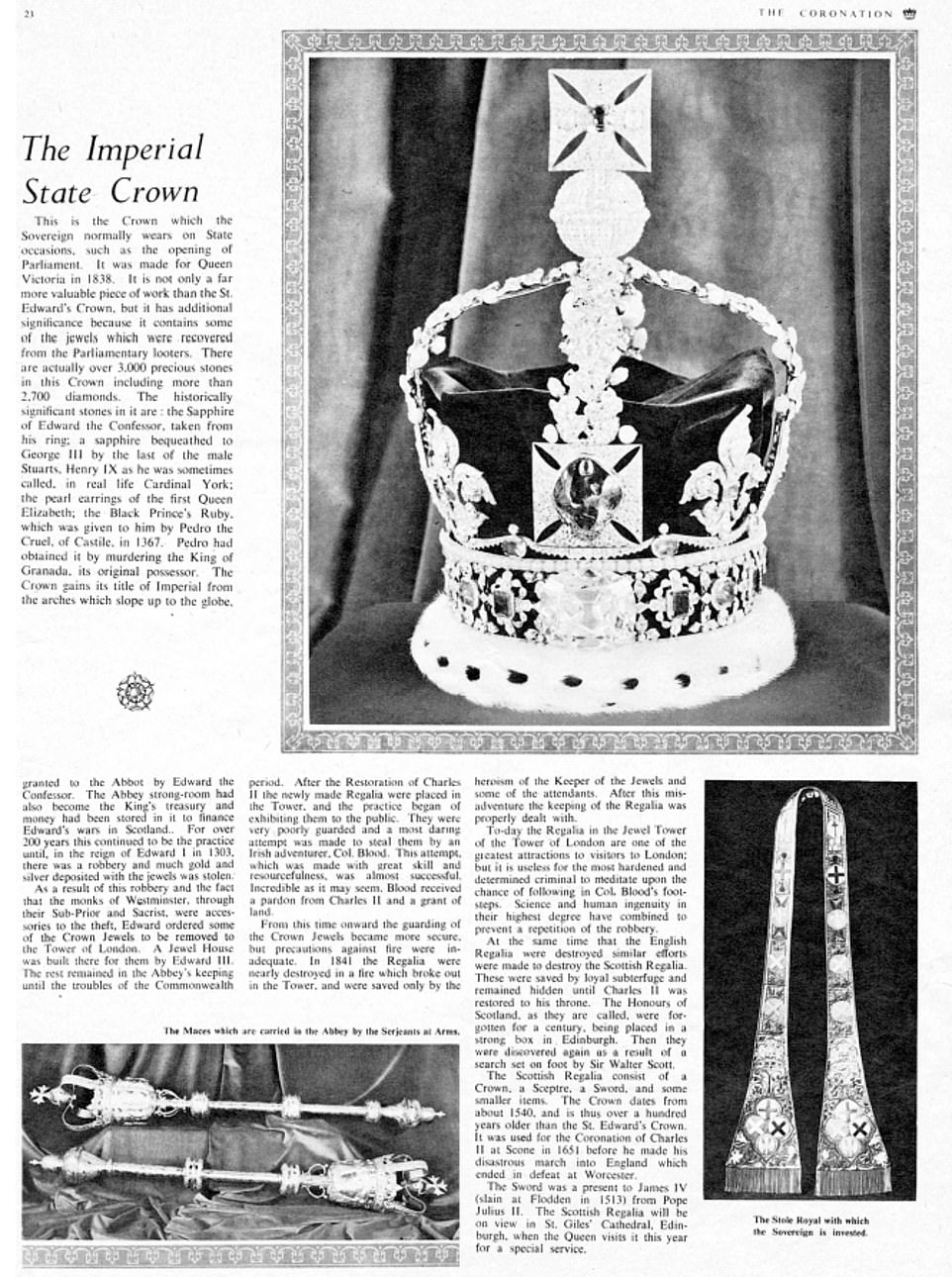 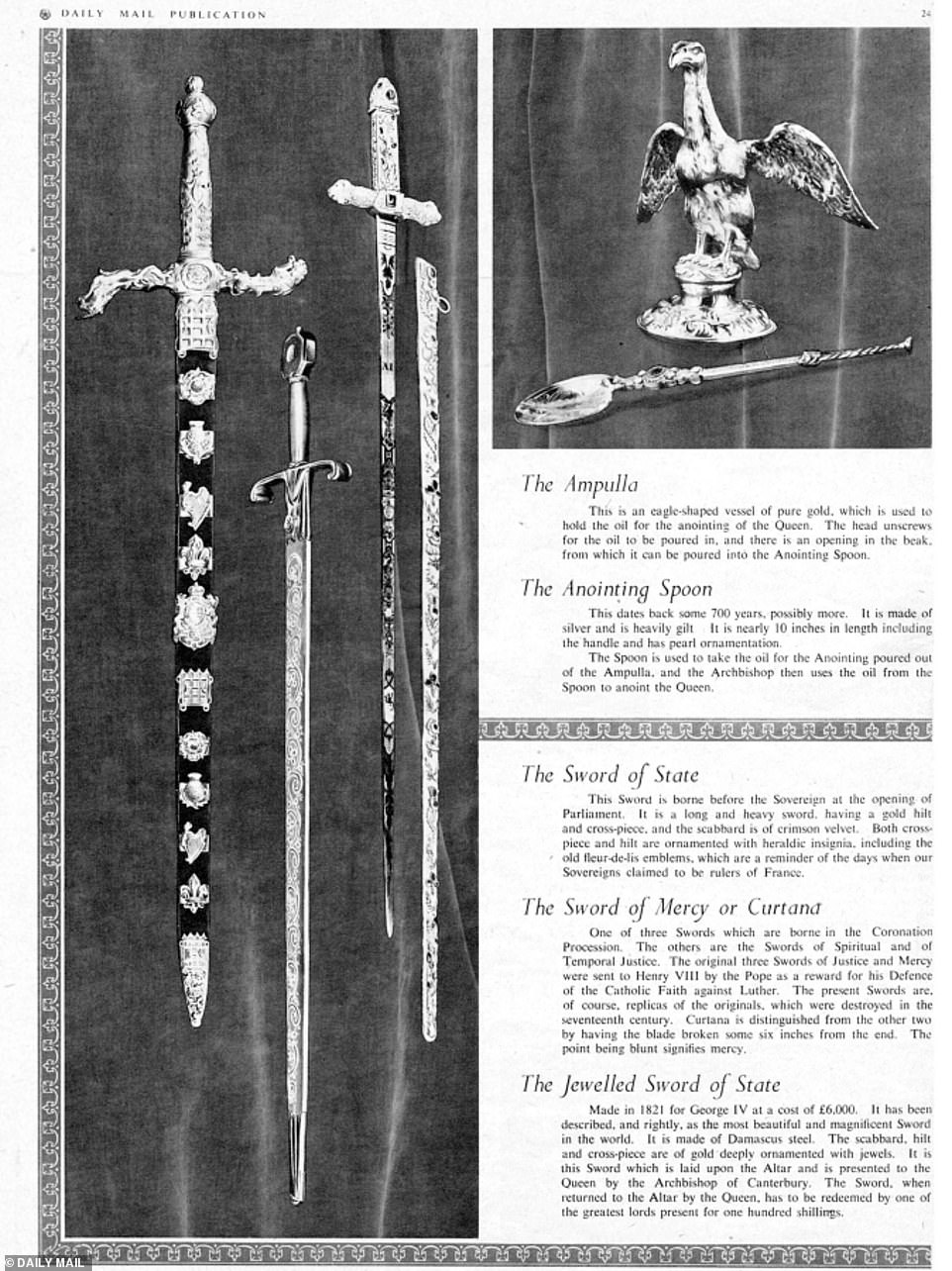 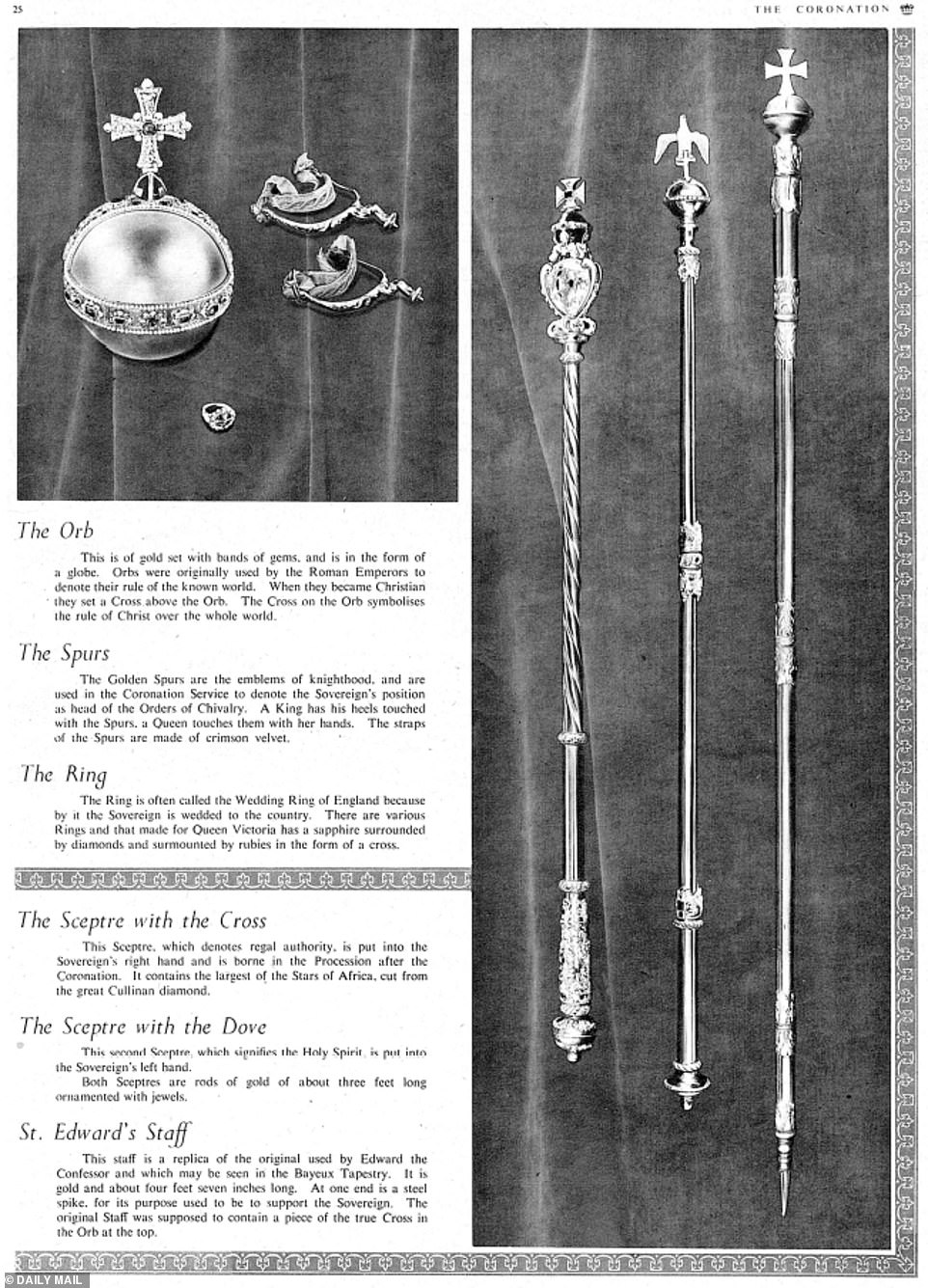 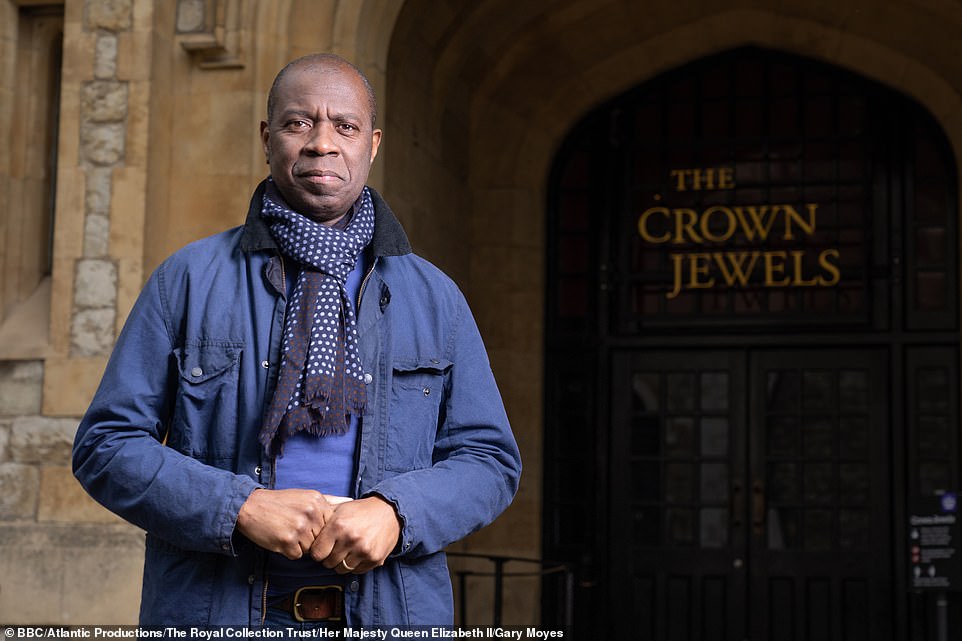 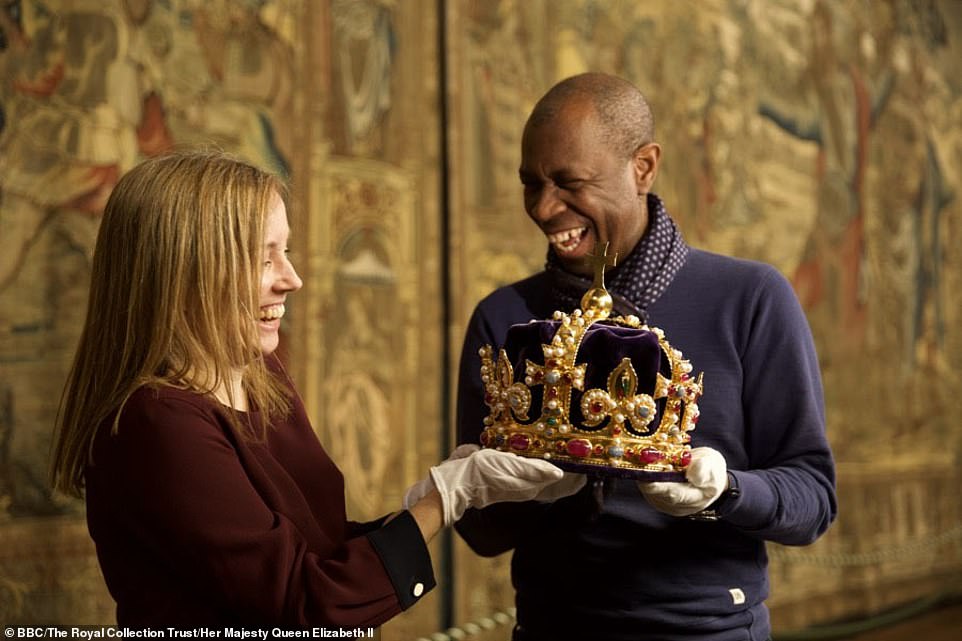 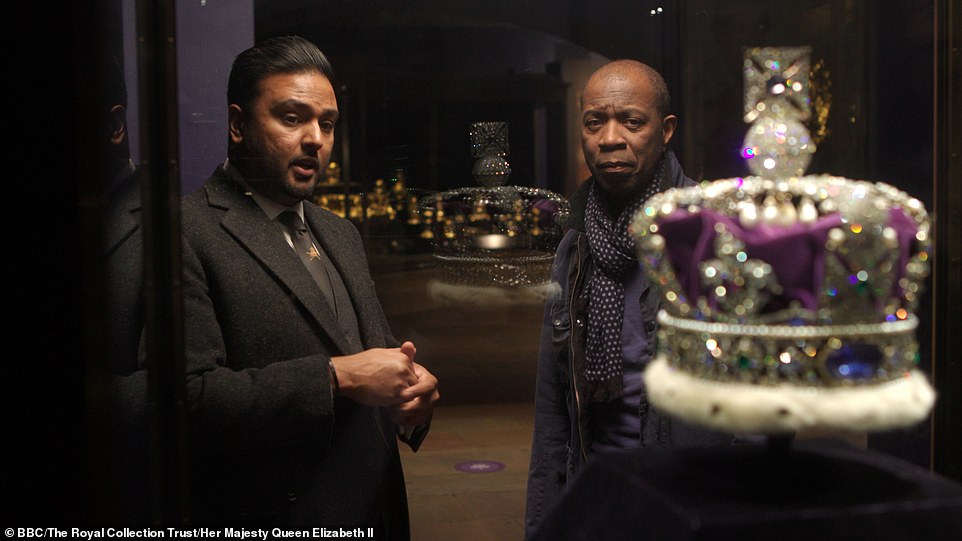 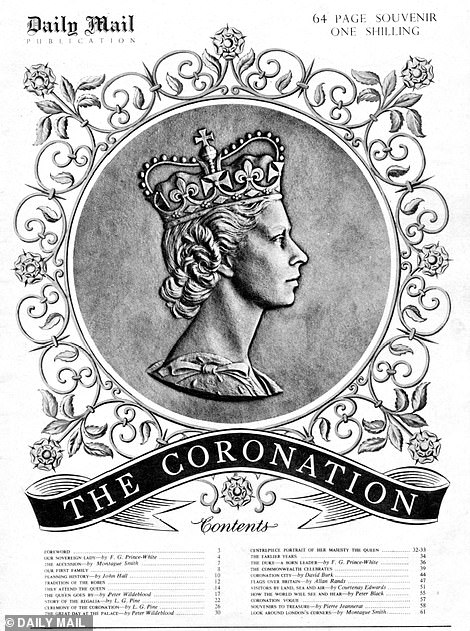 To celebrate the Queen’s Coronation in 1953, the Daily Mail produced a 60-page special supplement that delved into the history of the occasion

They were kept out of Cromwell’s clutches by being hidden in Dunnottar Castle in Kincardineshire.

When Cromwell’s forces besieged the castle, the jewels were smuggled out and buried under the floor of Kinneff Old Church.

The jewels were then returned to their previous home at Edinburgh Castle after the monarchy was restored.

Before the Restoration, some of the Crown Jewels had been kept at Westminster Abbey. But under the rule of Charles II, the newly-made jewels were placed in the Tower and began to be exhibited to the public.

They were famously nearly stolen in 1671 by renegade Anglo-Irish officer Thomas ‘Colonel’ Blood.

He disguised himself as a parson to fool the jewels’ guard, 77-year-old Talbot Edwards, and only failed in his attempt when the guard’s son unexpectedly appeared.

A gun battle followed and Blood was taken into custody but was spared execution when he demanded a meeting with King Charles II and the monarch pardoned him.

The Crown Jewels came under threat again in 1841 when a fire broke out in the Tower of London. They were only saved because they were carried out by the then Keeper of the Jewels and some assistants.

Speaking on BBC Radio 4’s Today Programme this morning ahead of the airing of his documentary, Mr Myrie said: ‘You’ve got a whole bunch of objects that symbolise the monarchy, symbolise power, symoblise status.

‘Within those objects you’ve got over 23,000 precious stones, diamonds and rubies and sapphires and that is what comprises the collection.’

The Crown Jewels airs tonight on BBC One at 7.30pm.