‘You cost us the rugby championship’: New vision of Wallabies skipper emerges after All Blacks loss 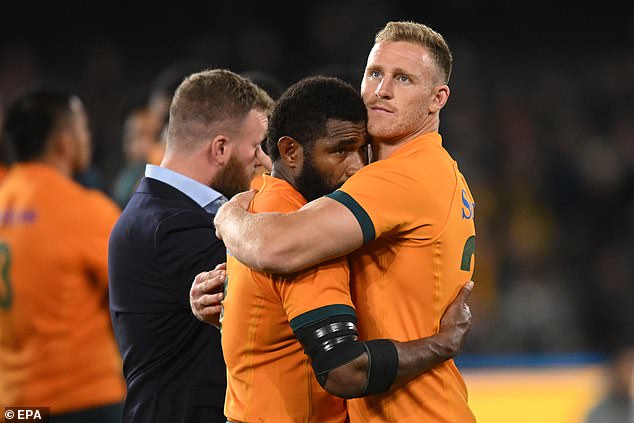 A new vision has emerged as furious Wallabies skipper Nic White tells the referee he ‘cost Australia the rugby championship’ after the squad’s heartbreaking 39-37 loss to New Zealand.

Australia looked to be heading for a historic win over the All Blacks after 20 years of pain in the Bledisloe Cup, before one of the most controversial decisions in rugby union history brutalized the Wallabies’ chances after victory looked certain.

It didn’t just mean Australia couldn’t win the Bledisloe Cup; it also meant the Wallabies crashed out of the Rugby Championship fight.

That was a point that was not lost on White, who confronted the referee, Frenchman Mathieu Raynal, after the game.

“He (Foley) was about to kick him out and for two seconds . . . mate, that just cost us the rugby championship,” an enraged White told Raynal.

After recovering from a 31-13 deficit in the second half to take the lead with three minutes to go, the Wallabies forced a penalty from the All Blacks scrum; anything but the sealing of victory.

But when flyhalf Bernard Foley stepped out of the ball to likely end the game, Raynal made the rare and unusual call to punish Foley for wasting time.

That gave New Zealand a close-range scrum, which set the stage for All Blacks fullback Jordie Barrett’s match-winning try that broke the hearts of Australian fans.

“I have been commenting for over 20 years and I thought it was a disgraceful decision by the referee, he burst under pressure,” Horan said.

“It was a disgraceful decision and World Rugby must look into it. It was horrible.’

Fellow Wallabies great Morgan Turinui, who commented on the game, said there was clearly a double standard.

“There is a law that you have 90 seconds from scoring the attempt to make the conversion,” Turinui said.

“(But) twice in the game the All Blacks went past 90 seconds and the referee rightly didn’t ruin the game by being pedantic and canceling the conversion attempt.” 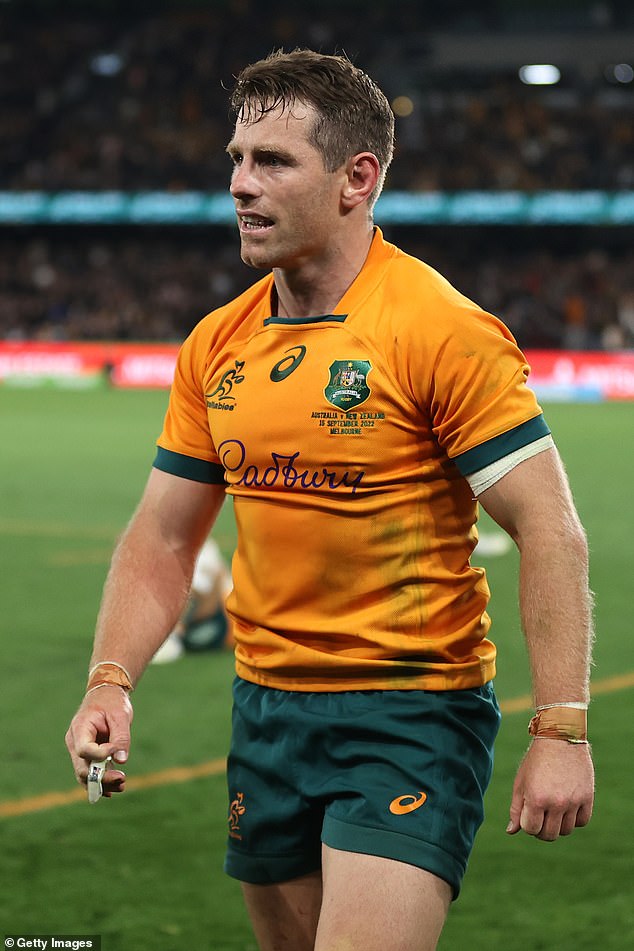 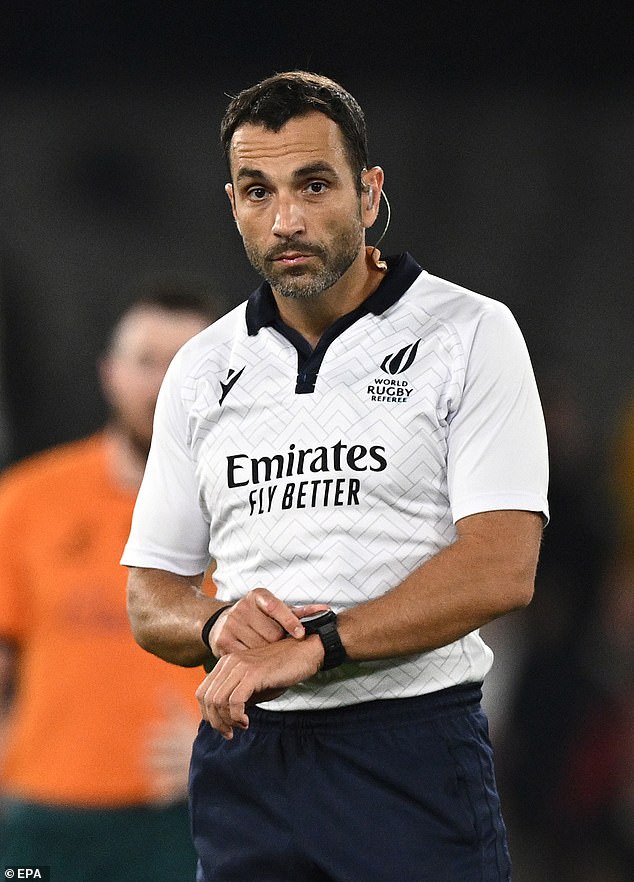 In his tense confrontation with White, Raynal stuck to his decision despite the ire of (almost) the entire rugby world.

“Nic (White) I’m sorry, you know exactly what I wanted,” was heard on the vision released by Stan Sports.

“So that’s not fair what you ended up doing, you’re just running the time and you know exactly. If you think I am incapable of giving a scrum then you are making a mistake.

The last comment in particular will no doubt irritate Wallabies players and supporters, with Raynal implying that the threat to his ego turned out to be the biggest motivation for his decision to take a penalty. 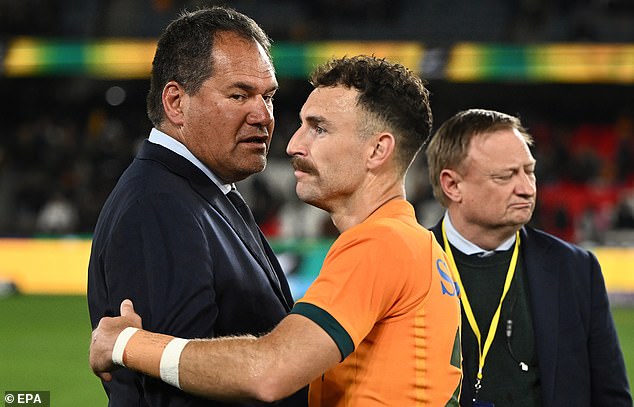 Wallabies captain Nic White (center) gets some consolation from coach Dave Rennie . after the game

It was far from the only controversial moment in the match.

Lock Darcy Swain faces a SANAAR court after an ugly challenge from All Black Quinn Tupaea that left the Kiwi with a tear on his ACL.

While Tupaea’s leg was outstretched as he tried to recover the ball from a maul, Swain landed heavily on him – something not allowed given the potential for injury.

This looks scruffy from Swain and rightly carded.

Rule 9.20.d: “A player may take the jackler out of the game at the ruck, but must not drop his weight on the jackler or target the lower limbs.”#AUSvNZL pic.twitter.com/JPNxQldtdh

It was an act criticized by All Blacks coach Ian Foster.

“We have a big problem with it,” he said at his press conference after the game.

“We have a player who is probably out for nine months and it is not allowed to point the legs to the side on a cleanout past the ball. “The rules are pretty clear.”

It gave Swain a yellow card, while many thought it might as well have been a red card.

He could be banned after a review, but a sharp-eyed pundit saw yet another example of double standards during the controversial match.

This 72 minute incident during Bledisloe I shows All Blacks prop Fletcher Newell from the side, dragging Scott Sio’s leg and leaving his body weight on his leg.

Interesting compared to Darcy Swain’s challenge on Quinn Tupaea, who was injured? pic.twitter.com/SqSg3EIGFF

‘Referee on results? This 72 minute incident during Bledisloe I shows All Blacks prop Fletcher Newell from the side, dragging Scott Sio’s leg and landing his body weight on his leg,” journalist Christy Doran tweeted.

“Interesting compared to Darcy Swain’s challenge on Quinn Tupaea, who was injured.”

Many fans criticized Doran for “achieving” his critique of Rayal, but the footage is there for all to see. 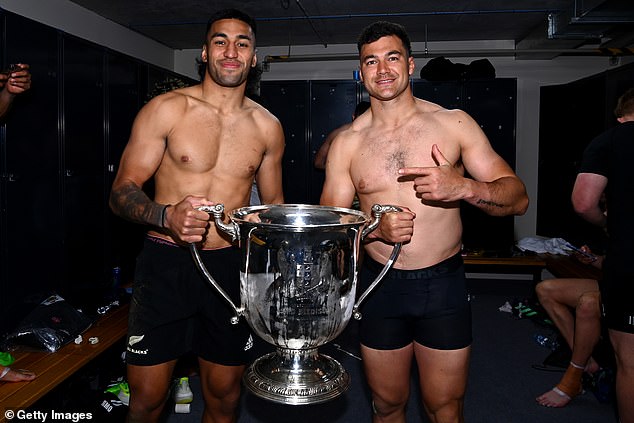 Former rugby referee Nigel Owens also flagged ‘divorce on result’, insisting Raynal should not punish or show a card based on how much a player is injured.

“It’s a tough one, there will be a lot of arguments that a yellow card is enough,” he said Fox Sports.

‘There will also be valid arguments that a red card would also be justified, especially based on the result. But you have to be very careful that you don’t always base your decisions on an outcome.’

For now, the Wallabies will somehow regroup for the second clash of the now lost Bledisloe Cup on Saturday afternoon in Auckland.