Zach Tuohy laughs at Bailey Smith, says headbutts are a ‘rite of passage back home’

Zach Tuohy laughs at Bailey Smith clash, says headbutts are a ‘rite of passage back home’ every weekend as experts predict MRO will send Bulldog straight to court

Geelong midfielder Zach Tuohy was all smiles after being headbutted from Bailey Smith on Friday night, with the Irishman saying the act was ‘a rite of passage back home’ – but the brain blast couldn’t be a laughing matter for the Bulldogs star.

The Dogs were down 45-56 three-quarters of the time when mid-forward Smith got into a heated argument with the 32-year-old, pushing his forehead into Tuohy’s face.

The 238-game veteran was seen clutching his face after the collision, with cameras showing a red cut over the Cats player’s eye, along with his ripped jersey.

After the game, Garry Lyon, the AFL’s major broadcaster, questioned Tuohy about the fuss.

“No, they were just handbags,” Tuohy . told me Fox Footy†

“I think I pulled and dragged him as much as he dragged me, so there’s not much in it.

“Every weekend it’s a rite of passage home.” 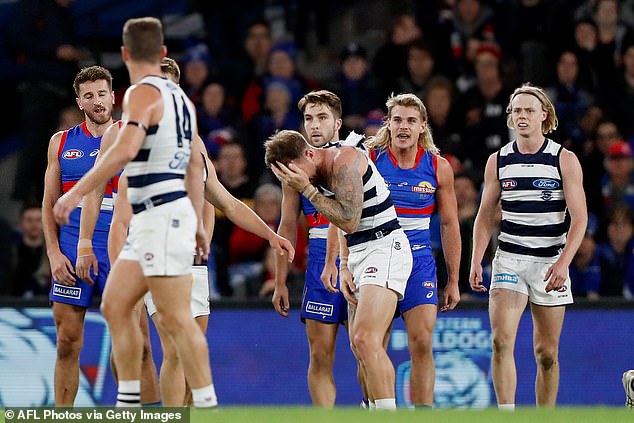 Tuohy and the 21-year-old Bulldog laughed after the game and shook hands after the Cats took an 83-70 win.

The moment stunned Lyon, who said the brain teaser wasn’t on.

“We’re shaking our heads right now. We cannot believe what we have seen,” he said shortly after the incident.

“It’s so strange for a young man who is almost the most prominent footy player in the league.

“If you don’t think this is going to be a story, hold on.”

“I can’t think of any teammates who have done it. Precious because he was fantastic in that quarter, Bailey Smith with his pace of work. What will the AFL say about that? They called Buddy Franklin’s act cowardly, which is worse,” Brown said.

Franklin was given a one-game suspension for his attack on Cotchin who was labeled “cowardly” by AFL lawyer Andrew Woods.

Buddy’s offense wasn’t sent straight to the tribunal, but that’s exactly what could happen to Smith, according to footy legend Gerard Healy.

“It should go straight to the tribunal,” he said of Fox Footy.

“We assume (the spot on Tuohy’s face) came from the Liverpool kiss. If he (Smith) takes that skin off that action, he’s in trouble.

“If Buddy takes a hit for a week, he gets more.”

Geelong’s win on Friday night lifts the side to fourth on the ladder, while the Bulldogs move back to eighth.

Smith and Tuohy finished the game with 19 disposals each, while Cats striker Jeremy Cameron stole the show with six goals to earn the Coleman Medal.